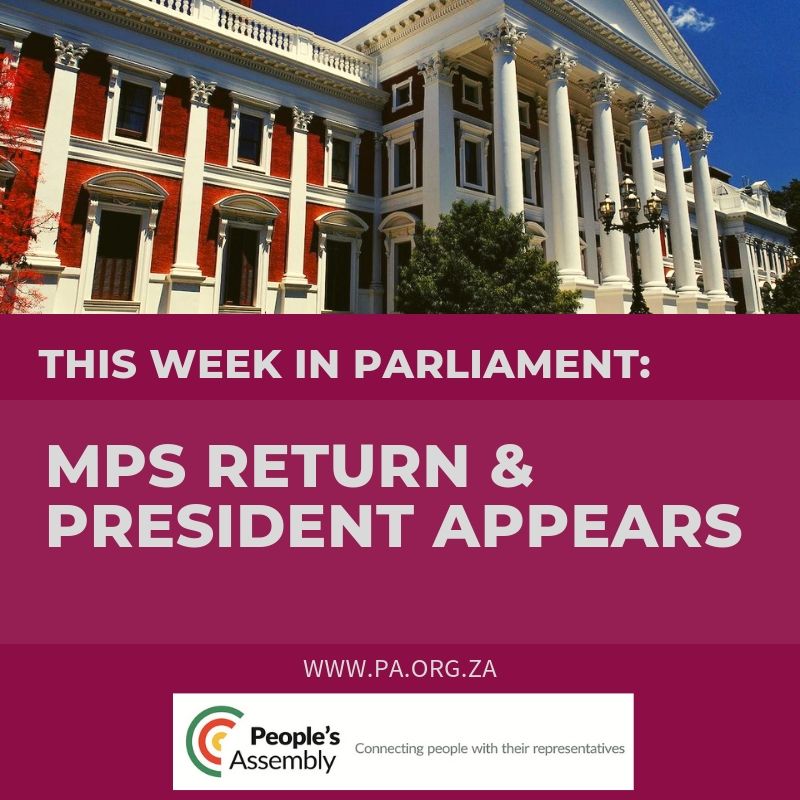 This session runs for five weeks and will be packed with activities. Some of the highlights include Committee and oversight work; oral questions to the Executive; important debates; training of lawmakers and the Women’s Parliament. In addition, Parliament will begin the appointment process for several government bodies and consider a request for an inquiry into the Public Protector’s fitness to hold office.

There’s just a smattering of legislation before Parliament right now but this is expected to grow during the term. Government and political parties have revealed their legislative plans and will slowly table their proposals. Also, some Committee are under pressure to meet constitutional court deadlines to fix defects in certain laws and will be tabling Committee Bills..

That said, the timetable is fluid and can be overtaken by unscheduled debates, statements and events.

The President's oral question session on Thursday is the high point of the parliamentary week. The President is required to answer questions once per term in accordance with the annual parliamentary programme. The questions are sifted and published beforehand to ensure only those satisfying the set criteria are put to the President. Four supplementary questions, arising from the reply to a question, are allowed.

Over the years, questions have been raised about the form, frequency and effectiveness of these sessions. Foremost, are queries about the type of questions posed and the quality of answers provided. Some argue that it is a choreographed exercise that does little to hold the President to account. To support this view, they point to the number of questions allowed, the vetting process, scripted response, soft questions asked by governing party MPs, long-winded statements camouflaged as questions and poor responses. Others point out that even though it is not a perfect mechanism for Executive scrutiny, it helps shape the public’s views and perceptions of the President. It's an opportunity for him to present ideas, demonstrate leadership abilities and address specific concerns raised. The supplementary questions, in particular, show whether the President has a sound grasp of issues and is able to think on his feet. It is also a rare opportunity for legislators to interact directly with the President.

President Ramaphosa will be probed on a variety of hot button issues: the economy, Bossasa, fundraising for his ANC presidential campaign and recommendations of the land advisory panel. Read the questions here

Meanwhile, the NCOP has scheduled a two-day strategic planning workshop to develop a framework that will guide its work during the Sixth Parliament. The overriding principle is to focus the work of the NCOP with a view to ensuring maximum impact in the fulfilment of its mandate.

Beyond this, the NCOP has arranged one sitting to consider, amongst other matters, the report of the Select Committee on Co-operative Governance and Traditional Affairs, Water and Sanitation and Human Settlements on notice of intervention issued in terms of section 139(1)(b) and (5) of the Constitution, 1996 to Amahlathi Local Municipality. The Committee visited the municipality last week as part of its constitutional obligation and indicated that it was “dismayed by the state of affairs in the Amahlathi Local Municipality”.

There are several noteworthy meetings in the Committee corridor. Here is a rundown of the highlights:

Orientation and training is essential to prepare MPs and make them more effective. In line with Parliament’s commitment to develop, empower and give MPs a deeper understanding of their sectors, several Committees have organised capacity building sessions and induction workshops.

The Portfolio Committee on Justice and Correctional Services is set to continue with its work to remove Adv Jiba and Adv Mrwebi from the NPA in line with the Mokgoro Report. Both prosecutors were fired by the President and the matter was referred to Parliament for approval. Adv Jiba is challenging the Mokgoro Report in court and has urged the Speaker to stop the parliamentary process until the review application is concluded in the High Court. According to Independent Media, the Chairperson of the Portfolio Committee on Justice and Correctional Services, Bulelani Magwanishe, “said they would continue with the process on Tuesday unless there was a court decision to stop them”. (Tuesday)

In 2018, the Constitutional Court confirmed that section 2(1) of the 1991 Upgrading of Land Tenure Rights Act was unconstitutional because it discriminated against women. Legislators will be briefed on the impact of this judgement. (Tuesday)

The Joint Standing Committee on the Financial Management of Parliament will discuss a wide variety of issues: Parliament’s audit outcomes during the Fifth Parliament; implications for Parliament on the Public Audit Amendment Act and the outcome of the Public Service Commission enquiry into the tragic death of Mr L Garane in September 2018. (Tuesday)

The Ministry of Human Settlements, Water and Sanitation will brief legislators on the First term expenditure report (Friday)