Holding elections is an important way to uphold democracy; allowing the public to vote for political leaders of their choice; and allowing citizens to participate in and influence government's decisions. South African elections have followed a five-year cycle since 1994.

The South African national and provincial voting system is based on party-list proportional representation, which means that citizens will vote for a political party, not individuals. Political parties then receive their share of seats in Parliament in proportion to the number of votes it received in the election. Before the election, each party produces a manifesto that tells the public what it will do if it wins. This should help you with your decision on which party to vote for.

In order to vote, citizens aged 16 years and older need to register as a voter; however, you must be 18 to vote. A voter must also be a South African citizen and have a green, bar-coded ID book. You only have to register once.

South Africans living abroad will, for the first time since the 1994 elections, be able to register to vote in the upcoming 2014 national elections. This is due to the passing of the Electoral Amendment Act in 2013. Previously, expatriates could only vote if they had registered in South Africa.

The diagram below was found here 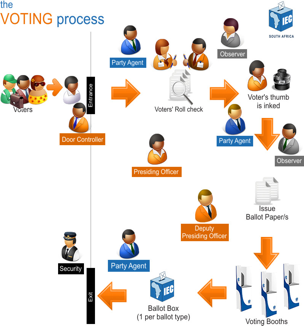 For more information, visit the website of the Electoral Commission of South Africa.