#LGE2021: Lessons Learnt from a Councillor 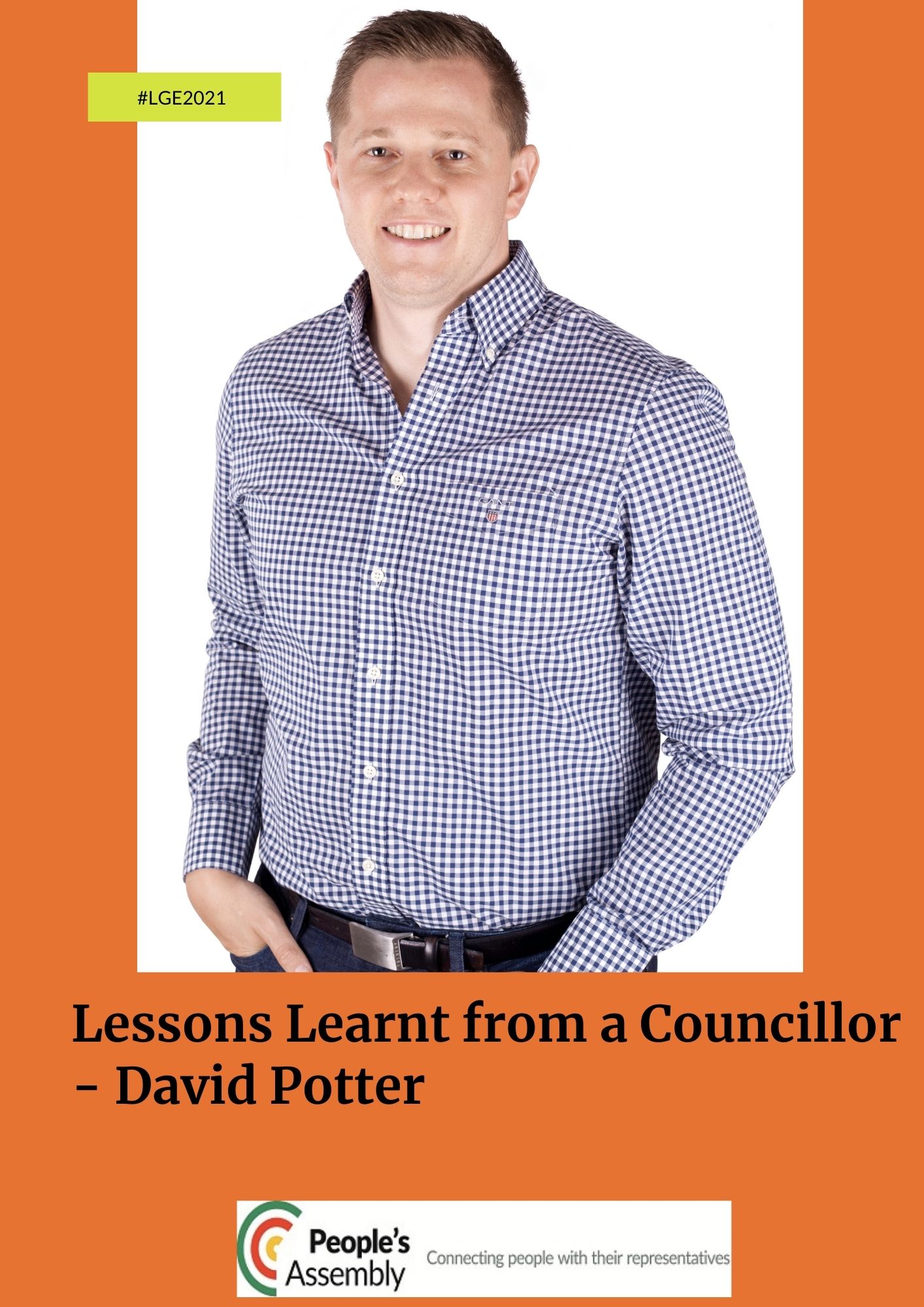 Municipal ward councillors play a vital role in ensuring that residents receive the municipal services entitled to them. In this blog, we interview an out-going Ward Councillor, David Potter from the Democratic Alliance, who shares his lessons learnt throughout his term.

Which municipal ward do you represent?

I represent Ward 102 in the City of Johannesburg.

The Ward is around 16.6 square kilometres, has a large central business district in it (Randburg CBD), many businesses, the home of DSTV, many public and private schools and is largely residential (with about 14 different suburbs).

What are some of your achievements in your term as a Councillor?

2021 marks the completion of my second term of being a Ward Councillor in the City of Johannesburg. I have been involved in civic minded matters since the age of 16. I think what continues to be important is that we encourage residents to get involved in their community – be it where they live, work or play. Look and Log issues you see wrong in the City and escalate to your Ward Councillor when they are not resolved.

Refer to this article here.

What are the greatest frustrations and challenges of being a Councillor?

The greatest frustration is the fact that the city does not always deliver. There is great expectation from residents and businesses that what they log, the city will fix, and with speed. Unfortunately this is not always the case. What is also frustrating is the lack of inter department or entity engagement. Where one city entity digs, and expects another city entity to come and reinstate, this communication does not happen and so the value chain of work completion fails. Without Councillors bringing the 2 parties together and chasing up, the value chain will never be complete. Councillors work day and night to ensure the city keeps the lights on, the water flowing, and other general service delivery happening. Without active Councillors escalating city failures, our communities would be much worse off.

Given hindsight, would you have done anything differently?

Not at all; I consider myself one of the most experienced Ward Councillors in the city having served two terms and having being involved in city matters long before being elected a Ward Councillor in 2011. I make good use in the platforms available as a Councillor to engage with the city – that being the oversight committees, written and oral questions to the Mayoral Committee Members (who report to the Executive Mayor), formal and informal communications to city executives and other channels available to us.

How did you interact with, respond to and involve the community in your work?

Sadly, the model of Ward Committees in the city of Johannesburg does not work. Whilst there are lots of support staff for the management of Ward Committees, the work of Ward Committees is largely looked over. There is poor training and access to resources, and I imagine that many City Officials fail to know the role of Ward Committees, whom are elected into their positions. There is generally poor minute keeping and following through of issues raised by Ward Committees. As a Ward Councillor I engage with my residents on Twitter, as that is where the City also provides updates. Over the years the City has embraced Twitter (with a push from myself in around 2015, see Brain Storm Magazine article), and the City has recently integrated some fault management systems to automatically update when there are large scale power outages. Twitter is a critical tool for Government and Ward Councillors to use to engage with their residents, at very low cost and with speed and ease.

The Auditor-General says (and this is backed up by public perception) that municipalities are dysfunctional. Do you agree with this assessment? Expand your answer.

I'd say that the City of Johannesburg is struggling and some entities or deliverables within entities and departments could be considered 'dysfunctional'. As a Ward Councillor we are exposed to the entire City daily, and currently as we sit today, the Joburg Roads Agency in the City of Johannesburg struggles to deliver on many basics. We are at the start of the rainy season in Johannesburg, and we have hardly noticed the Joburg Roads Agency cleaning storm water drains, of which the implication can be devastating. Another concerning entity within the City of Johannesburg is the Joburg Property Company. Amok with controversy around the COVID-19 Personal Protective Equipment irregular spend of which was reported, we believe that many officials are on suspension and the entity really struggling in their duty to deliver. The Joburg Property Company is a critical entity to the City which manages the maintenance, development and leasing of City property and buildings amongst a ton of other duties. I have attempted to engage formally with the Joburg Property Company for 2 years now on a range of issues including lease renewals of commercial properties, concerning leases which have not yielded any development in 10 years, alleged irregular income streams not making their way to the City and an array of other matters. I am glad the Auditor-General is speaking out on municipalities, but action needs to follow and with speed.

Refer to this article.

What changes and reforms are needed to ensure effective municipal management, oversight and service delivery?

In the City of Johannesburg specifically, the department 'Citizen Relationship and Urban Management' needs an overhaul and to be given some power. Currently this department is a post office internally directing mails and messages and issues with little to no authority. This is both frustrating for Councillors and the City officials, and a waste of rate payers' money. We also need to ensure that every rand spent on repairs and maintenance, infrastructure upgrades and the like is spent wisely. My concern is that this is currently not the case.

Our communities must Look and Log issues and escalate them to the City administration management, such as the 'Citizen Relationship and Urban Management' department; and if not resolved then to their Councillor. Remembering that Councillors may not give City Officials instructions, but merely request and escalate within the framework of the law.

What would your advice be to the in-coming Councillors?

My advice would be to set boundaries upfront; but at the same time to be available. Councillors are human, have families and lives, get sick and also generally need time off. Councillors should make use of all the available channels that exist to hold the City or Municipality to account. Use your full monthly or quarterly allocation of written or oral questions. I always say that if you escalate 10 issues and only 6 get resolved, that is 6 more than 0. Keep at it and know that you will not manage to resolve everything, but must give it your best try. Furthermore, engage with our community. Select 1 or 2 channels of communication and ensure that the community knows where to find the information they need. Empower communities to follow the local Twitter accounts of the power or water departments or entities within their City or Municipality.