THIS WEEK IN PARLIAMENT: The Economy, Legislation and more in the spotlight.

We are mid-way through the second term and the programme has a familiar pattern this week: the legislature has scheduled committee meetings, oversight visits and sittings in the main chambers. 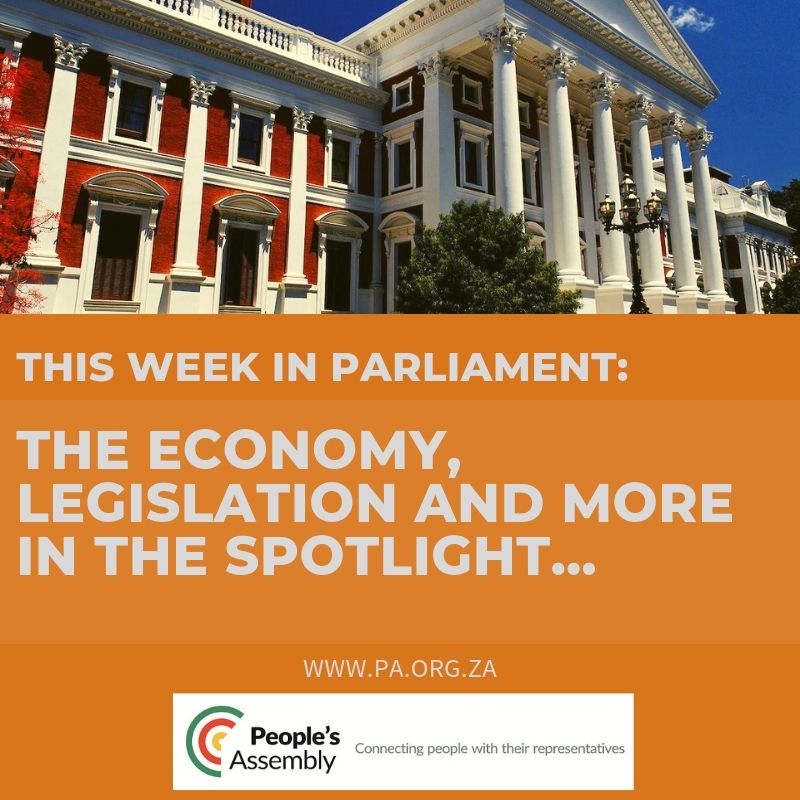 A debate to commemorate National Women’s Day is a standing item on the agenda and is held every year. This tradition will continue on Tuesday when the National Assembly debates the chosen theme for this year: “gender and institutionalism – towards strengthening the National Gender Machinery “. The debate wrap-ups Parliament’s activities for this year’s Women’s Month celebrations.

Unemployment and the economy are recurring debate topics in the national legislature. Stats SA’s quarterly labour force survey for the second quarter of 2019 showed that the country’s unemployment crisis is deepening. On the expanded definition, 38.5% of South Africans are unemployed. Last week, the Minister of Finance published his plans to boost the ailing economy and asked the public to make comments.

Given this reality, it is not surprising that two debates have been scheduled on this matter.

On Thursday, the leader of the opposition will lead an urgent debate of national importance about the unemployment crisis in South Africa.

This will be preceded by a Tuesday discussion –proposed by Mr S Mbuyane (ANC), on “building a developmental state capable of growing an inclusive economy that creates jobs”.

On Wednesday, the peace and security cluster will answer oral questions. The Peace and Security cluster includes the Ministers of Defence and Military Veterans, Home Affairs, International Relations and Cooperation, Police, Justice and Correctional Services and State Security. Some of the questions are about the operations undertaken by the police against gangs in the Western Cape, progress made with the Special Investigating Unit special tribunal to fast track misappropriated state funds as announced in SONA, overcrowding in prisons and enforcing immigration laws. Find the full question paper here.

Meanwhile, the NCOP has only scheduled one sitting this week. Select Ministers in the Social Services Cluster will be probed about a variety of matters including the implementation of a new Comprehensive Sexual Education Programme, eradication of unsafe school ablution facilities, monitoring mechanisms for NSFAS funds and political interference in SA sports. Find the full question paper here.

Over in the Committee corridor, there is a broad and interesting spread of meetings for the week.

Orientation and training is essential to prepare MPs and make them more effective. In line with Parliament’s commitment to develop, empower and give MPs a deeper understanding of their sectors, several Committees have organised capacity building sessions and induction workshops.

A joint meeting of the Portfolio Committee on Health and Select Committee on Social Services has been scheduled to meet a delegation of The Elders to discuss how best South Africa can introduce health reforms that will lead to universal health coverage. The timing is relevant as the government is pushing through with the National Health Insurance Bill to ensure all South Africans are provided with essential and equitable healthcare regardless of status. The Elders is an international NGO of notable public figures working together “for peace and human rights”. (Tuesday)

Parliament has invited the public to comment on the Special Appropriation Bill. The Bill provides for the appropriation of an additional amount of money (R59 billion) for the requirements of the Department of Public Enterprises to assist Eskom with its financial obligations and to provide for matters connected therewith. The Standing Committee on Appropriations will hear the Financial and Fiscal Commission’s input on the Bill. (Tuesday)

Lawmakers will get a progress report on the latest developments in the finalisation of the new SETA landscape and an overview of the work of the SETAs. Presenting his budget speech in July, the Minister of Higher Education announced that the new SETA Landscape will be implemented from 1 April 2020 with the aim to strengthen, realign and repurpose the SETA system. (Tuesday)

The Fifth Parliament held a number of meetings on the Steinhoff matter as pension fund monies that were invested in the company from the GEPF and the PIC were at stake. In its legacy report, the Standing committee on finance stated: “Despite several meetings on Steinhoff issues, the Committee believes the relevant state agencies are making dismal progress. The Committee believes the incoming Committee needs to persist with these agencies on the need to act speedily and decisively. it is important to ensure that private sector corruption is tackled as decisively as public sector corruption”. In line with this recommendation, a joint meeting will receive a progress report from multiple agencies and stakeholders on the matter.

The foster care system will be in the spotlight when MPs are briefed by the Department of Social Development on the backlogs and how it plans to address these. (Wednesday)

In what is a minor rarity, the Portfolio Committee on Justice and Correctional Services will focus on correctional services matters for two-days in a row. It will discuss a report of the Commission on the Health and Welfare Services for Female Offenders. (Wednesday)

The Department of Higher Education and Training will give a progress report on the construction of the new TVET college campuses including a general overview of the TVET sector with respect to governance, management, teaching and learning. The Minister previously stated: “We are also continuing to update the TVET College curricula in order to make the learning outcomes current and relevant to workplace practices. However we are deeply concerned that despite the increase in funding to TVET Colleges, student performance has not improved. As a result, we are currently in the process of institutionalizing lecturer capacitybuilding using funding from the skills levy system. A similar process was adopted in the university sector almost a decade ago, with very positive results. We have also established a task team to address the backlogs on the issuing of TVET certification”. (Wednesday)

The Joint Standing Committee on the Financial Management of Parliament will be briefed on the institution’s draft 2020/21 budget and annual performance plan. (Thursday)