The Week Ahead: Busy week as National Assembly recess looms 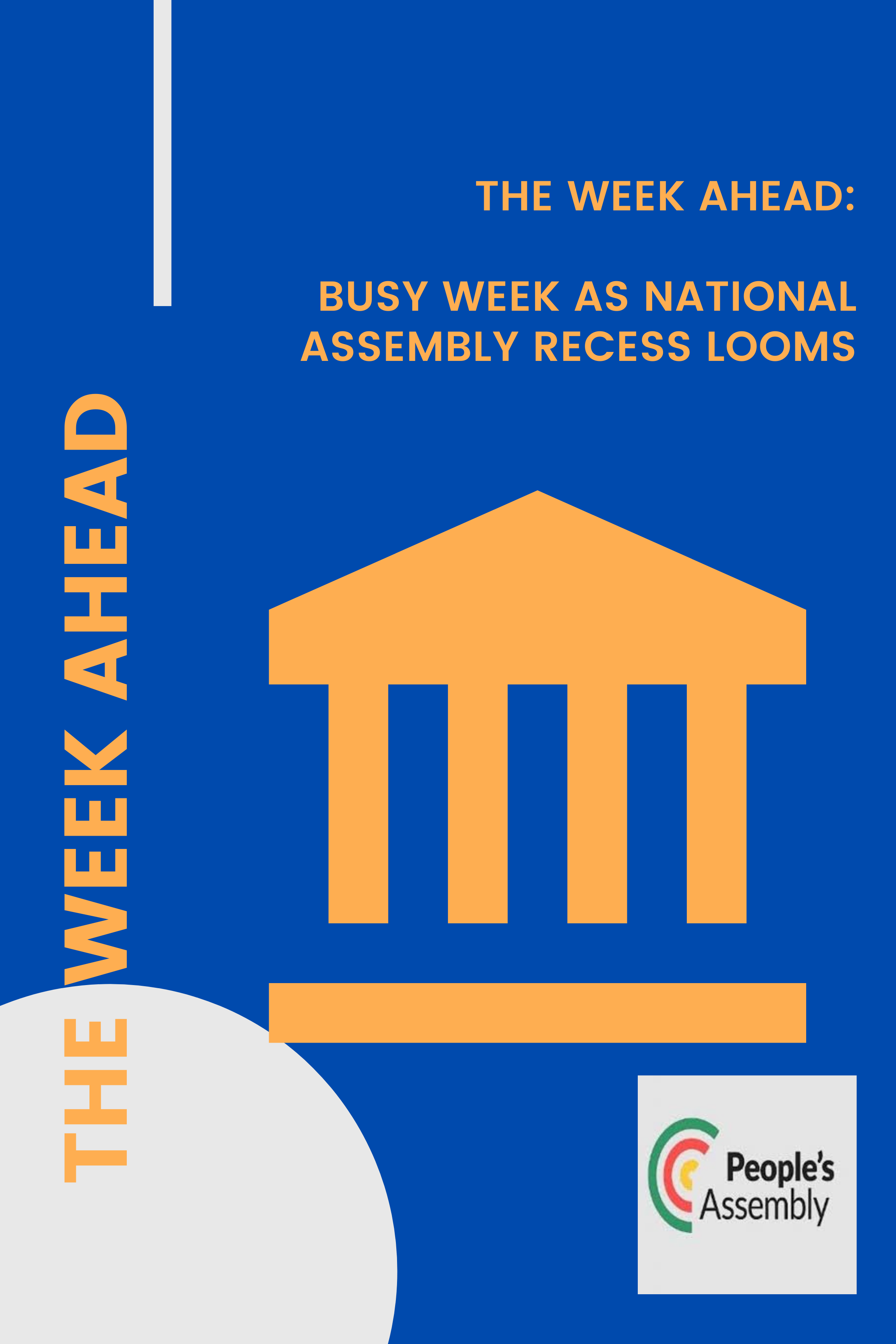 A combination of a heavy legislative load, some important hearings and the pending recess break should mean plenty of fizz in Parliament this week.

The constituency period beckons, with MPs in the National Assembly due to depart at the end of the week and return to Parliament on 17 August 2021.

There is no opportunity to go through the motions as a fair amount of heavy-duty business will be done before they go.

While the extended constituency period is meant for lawmakers to engage directly with the public and prepare for the upcoming local government elections, several committees (at least 9 so far) have scheduled urgent business during this period.

Meanwhile, NCOP delegates will be unaffected by this - they will sit until 20 June 2021.

In the National Assembly, the main plenary event will be the debate on the Presidency's budget vote scheduled for Wednesday and Thursday. In their speeches, the President and Deputy President will talk about the Presidency’s budget and priority areas: defeating the coronavirus pandemic; accelerating economic recovery; implementing economic reforms to create sustainable jobs and drive inclusive growth; and fighting corruption and strengthening the state. There should also be updates on special projects, government's efforts to stabilise SOEs and attract investment to the country.

As with previous occasions, this will be a robust encounter and all the heavy hitters (party leaders and senior MPs) will be fronting the debate. The President will have to defend a wide range of charges, such as the performance of departments and entities, accusations against various cabinet ministers, performance agreements between his office and cabinet and the spending on legal fees, consultants and compensation of employees.

One of the peculiarities of our parliamentary system is that there is no parliamentary committee that oversees the Presidency. According to the IFP, South Africa is unique among parliamentary democracies throughout the world and the party has repeatedly asked that this anomaly be corrected. Previously, the IFP leader has stated that “while the budgets of every government department are pored over and questioned before we come here to express our agreement or disapproval, the Presidency's budget is presented as a fait accompli, and we rise in this House with scant capacity to debate what is being spent, where it is being spent and how it is being spent”.

The other big highlight will be the debate on Parliament's budget (the NA and NCOP will be having separate debates), on Tuesday. In their speeches, the presiding officers are expected to underscore the role of Parliament in our democracy, talk about challenges facing the institution, highlight successes and the impact of the virtual Parliament and give some detail on how they plan to implement the institution’s vision.

A major concern is that Parliament’s budget has been cut and this will affect its ability to conduct its oversight function and fill vacancies.

For their part, MPs are expected to complain about insufficient funding provided to political parties, inadequate facilities and support to MPs, poor replies to questions by the Executive, lack of decorum in House as well as the shortcomings in the Rules and their application. Another matter that will be raised sharply and which has been highlighted by the Zondo Commission will be the charge that Parliament is not doing oversight, but merely compliance, and that interventions are needed to strengthen oversight, accountability and public involvement.

Heavy rhetoric and electioneering will be on full display when lawmakers debate Youth Day on Tuesday. The theme is: “Growing youth employment for an inclusive and transformed society amid Covid-19”.

A big chunk of this term was spent considering the 2021/22 national budget. The National Assembly will conclude its part when it processes the Appropriations Bill and individual budget vote debates on Friday.

Nation-wide public hearings on the Expropriation Bill continue this week (3-6 June). Hearings will take place in the Eastern Cape. This is the sixth provincial stop.

The Portfolio Committee on Social Development will kick-start provincial public hearings on the Children’s Amendment Bill on 6 June in Limpopo, which will run through until 9 June.

In comparison, the NCOP plenary programme is moderate. Delegates will meet over two days. On Tuesday, the agenda is the Division of Revenue Bill and 2 policy debates (Parliament and Tourism). An additional 2 policy debates have been arranged for Friday’s sitting (Human Settlements and Water and Sanitation).

The ad hoc committee tasked with amending the constitution to allow for expropriation without compensation has until 31 May to conclude its work and report back to the National Assembly. The Committee missed previous deadlines and had to request extensions. The committee is expected to finalise the draft bill on Monday; however there is still disagreement on some key issues.

Below is a rundown of the highlights in the Committee Corridor:

Ad Hoc Committee on the section 100 Intervention in the North West Province, (National Council of Provinces), [Briefing by the IMTT on outstanding matters related to s100 intervention in North West], Virtual Meeting Platform, 15:00-18:00

Joint Meeting: Portfolio Committee on Trade and Industry and Portfolio Committee on International Relations and Cooperation, (National Assembly), [Joint briefing with PC on International Relations and Cooperation on the current negotiations in relation to the waiver for COVID-19 vaccines at the WTO], Virtual Meeting Platform, 09:00-12:00

Portfolio Committee on Sport, Arts and Culture, (National Assembly), [Consideration and adoption of committee minutes; Briefing by the Department of Sport, Arts and Culture on the Third Quarter Performance Report, and an update on the third phase of the COVID-19 relief funding], Virtual Meeting Platform, 09:00-13:00

Standing Committee on Public Accounts, (National Assembly) [Briefing by National Treasury and DBSA on the allegations of maladministration, mismanagement and corruption at the Development Bank of Southern Africa (DBSA)], Virtual Meeting Platform, 09:30-14:00

Standing Committee on Public Accounts, (National Assembly), [Follow up meeting with the Special Investigating Unit on to the Procurement of Personal Protective Equipment (PPE) for COVID-19 pandemic], Virtual Meeting Platform, 09:30-13:00

Committees provide a platform for the public to present views directly to MPs. Share your on the ground experience and expert information to the relevant committees. Critically, what questions should MPs pose to the Executive as they conduct their oversight work?

During the constituency period, MPs have a duty to be available to the public, help solve problems and report back to their constituents on what is happening in Parliament.