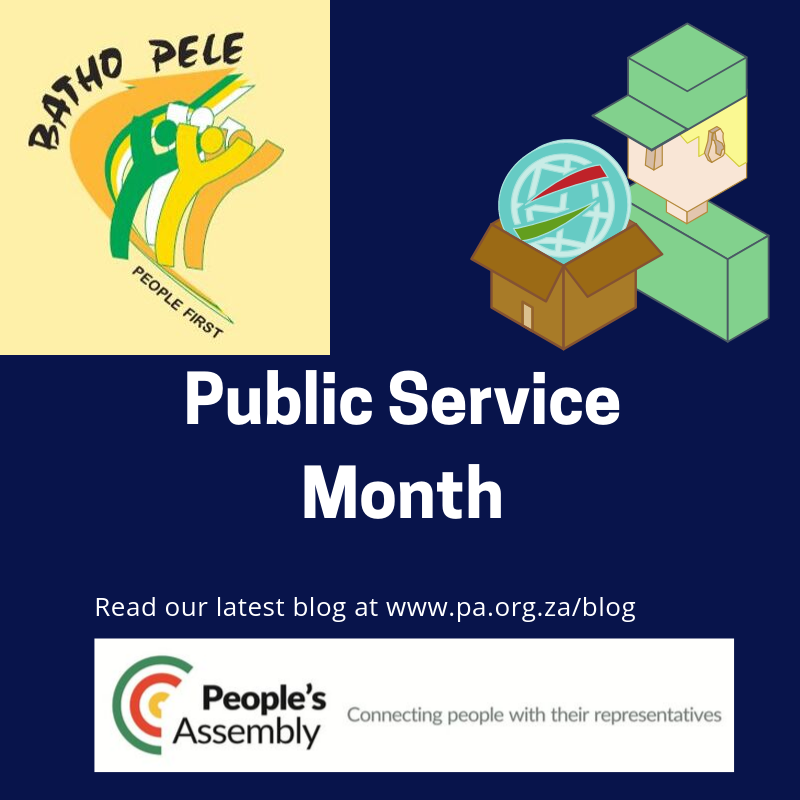 This is an annual event in the calendar of the Department of Public Service and Administration and theme for this year’s celebration is: “Khawuleza, Taking Public Service to the People. Batho Pele: We Belong; We Care; We Serve.”

In this blog, we highlight the evolution and transformation of the South African public service from 1994 to date.

The 1996 Constitution provides clear ideas of the kind of Public Service South Africa envisages: (Presidential Review Commission 1998): - Professionalism, impartiality and excellence; - Accountability and transparency; - Participatory policy-making; - Efficiency, effectiveness, and equity; - A developmental and service orientation. South Africa has gone through significant transitions. At the same time, the public sector has also changed, becoming more representative of the diverse backgrounds and needs of the South African people. Accordingly, the public sector’s mandate has broadened. Economic growth and good stewardship of South Africa’s resources and economy, equal education opportunities, a strong healthcare system and services, significant infrastructure investment, equal access to housing, and social program delivery are some of the major priorities.

1997: Launch of the Batho Pele initiative In 1997, the Department of Public Service and Administration, recognising the need for an ethos of service delivery, launched the Batho Pele initiative (a SeSotho phrase meaning ‘putting our people first’), aimed at improving efficiency and accountability. Since then, Batho Pele has been the government’s mantra in as far as service delivery to the public is concerned. However, some critics at the time felt the initiative failed to take root or show significant results in changing the politico-administrative culture.

2000: The Department of Public Service and Administration Review

At the turn of the millennium, there was concern, particularly from government, that the transformation of the public service was moving at a snail’s pace. Pursuant to this observation, the Department of Public Service and Administration Review of 1999 to 2000 was undertaken, which identified the following shortcomings of the transformation project: time lines were overly optimistic; it tackled too many interventions at the same time in an unplanned fashion; the need for management development had been underestimated; and that, in hindsight, some interventions could have undermined the resilience of the bureaucracy. Following the review, the Senior Management Service (SMS) was introduced, which developed a Handbook defining a competency framework for senior managers in the Public Service (directors, chief directors, deputy directors general, and directors general) as well as junior managers. The competency framework (2002) identified ten core managerial competences, ‘honesty and integrity’ being a central competency.

The launch of government’s Expanded Public Works Programme in 2004, aimed at providing poverty and income relief through temporary work for the unemployed, was a major development in the evolution of the public service in SA. It is an important driver of public sector job creation, and focuses on providing income relief through creating jobs for the unemployed and unskilled that involve socially useful activities. The programme creates jobs through government funded infrastructure projects. It does this through non-profit organisations and community work programs, as well as public environment and culture programs. As such, much of the public sector job growth to date relates to the construction industry, the protection and safety sector, public sanitation and personal care industries.

2006: Launch of the Public Administration Leadership and Management Academy (PALAMA)

Mindful of the need for holistic capacitation of civil servants, government, in November of 2006, constituted the Public Administration Leadership and Management Academy (PALAMA), which went on to be formally launched in August of 2008. PALAMA is a SeSotho word meaning ‘arise’ or ‘get on board.’ PALAMA’s focus is not only to provide training but to also facilitate leadership development and management training, in collaboration with other training institutions so as to significantly increase its offerings and reach.

A diagnostic overview on the state of the public service was undertaken by the National Planning Commission in 2011. The Commission, in its report, identified “deeply rooted systemic issues,” which require, “a long-term and strategic approach to enhancing institutional capacity.” The Commission highlighted “a set of interrelated issues including instability resulting from repeated changes in policy, under staffing and skills shortages, obstacles to building a sense of professional common purpose in the public service, political interference, lack of accountability, and insufficient clarity in the division of roles and responsibilities.”

Flowing from the recommendations of the aforementioned Commission, the processing of the Public Administration Bill, which had been in consultation since 2007, was expedited. This Bill initially provided for the following (later developments indicated in parentheses): Establishing a single public Service (National, Provincial and Local ‘spheres’) with national standards and systems. The Bill was signed into law in 2014 and seeks to confront corruption, non-management, and mismanagement directly, ultimately providing a legal framework wherein senior managers within the public service can be dismissed for not instituting anti-corruption and other disciplinary measures.

2019: Current state of the Public Service

Owing to the highlighted developments throughout the years and many other, the public service has undergone a significant amount of change, both quantitatively and qualitatively. In 2011, the racial and gender composition of senior management in the public sector was a follows: 72% were black African, 10% coloured, 5% Asian (87% black) and 13% white; 63% of senior managers were male and 37% female. The public service at that time consisted of more than 1.6 million employees, spread across all spheres of government. Three years later, according to the June 2014 Quarterly Employment Statistics (QES) survey, public sector employees had grown to a grand total of 2.2 million, disaggregated as follows: 455 701 national government employees, a further 1,118,748 people working for provincial authorities, 311,361 people employed by local authorities and 275,851 employees worked for “other government institutions” like libraries, parks, zoos and education and training authorities. By the end of 2014, public sector employment’s share of total jobs had risen to 17.5%, up from 14.5% at the beginning of 2008. The large contributors to public sector job growth are occupations that fall under the category of unskilled workers. These include sweepers, farmhands and labourers, helpers and cleaners, construction and maintenance labourers, and garbage collectors. The other major contributors are medium-skilled workers. These are police and traffic officers, prison guards, institution and home-based care workers, other protective services, cooks and childcare workers. Higher-skilled jobs such as primary and secondary school teachers, finance and administrative managers and legislators have also contributed to public sector job growth. In respect of racial transformation, notable progress has been recorded thus far. By 2018, Africans make up 77% of public sector employment compared with 66% the private sector. Females make up 52% of the workforce, compared to 44% in the private sector. Notably, the public sector has clearly been able to transform its labour force at a faster pace than the private sector. It has hired a higher proportion of both women and African workers in the sector, groups that were discriminated against under apartheid.

Afrobarometer (2019), in its survey of perceptions on public service delivery, notes that South African citizens seem to consider that improvements have recently occurred in several aspects of state service delivery. The survey asked all respondents whether “things are worse or better now than they were a few years ago.” However, perceptions appear to be gloomy at the local government level. The sixth South African Citizen Satisfaction Index (SA-csi) conducted by Consulta in May 2019 shows that citizen satisfaction and trust in municipal service delivery is at its lowest ebb since the inception of the Index in 2014. SA-csi 2019 measured the Citizen Satisfaction and Trust in service delivery in eight Metropolitan municipalities as a snapshot. Overall, the results show that expectations are very far from being met, and that there are significant gaps in expectations versus the perceived quality of service delivery that citizens experience. The delivery gap between what citizens expect and what they perceive has also widened compared with the previous year’s results.

In a nutshell, the evolution of the public service since 1994 has not been without challenges. There are still a number of challenges in need of immediate attention. Such challenges include corruption in some government departments, a lack of accountability resulting in the tarnishing of the image of the public service, inefficiencies in the delivery of basic services, the uneven redistribution of state resources and opportunities, and fragmented service delivery models due to a shortage of qualified and experienced public service personnel, especially in historically disadvantaged areas. Corruption, in particular, has the propensity to tarnish and undermine the state’s institutional integrity, leading to citizens’ apathy towards the state.