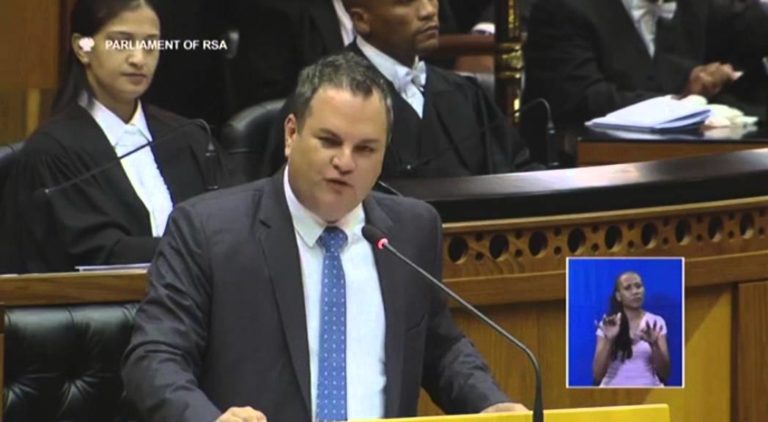 What is your political background and how did you become an MP?

My father was a municipal councilor in Durban just before Apartheid ended, but unfortunately he never made it to Parliament. My political activism began at university and for the next decade I was part of all kinds of political campaigns. But, it was in 2002, while I was living in Port Alfred in the Eastern Cape, that my formal career as a politician started. Within a couple of months of joining the local Democratic Alliance (DA) branch I was the chairperson. In 2006 I was elected to the local council of the Ndlambe Local Municipality. I was DA Chief Whip for five years while serving there. I then moved to East London where I served as a member of the Buffalo City Metro Council and DA Chief Whip until 2013.

I came to the National Assembly just before the end of term of the Fourth Parliament in replacement of Athol Trollip, following his decision to go back to the Eastern Cape as provincial DA leader. In 2014 I was officially elected to Parliament in my own stead and I’ve been here since.

Why the DA and not another political party?

It’s the only party that appeals to my liberal values. Diversity of identity and opinion; individual liberty and the free market – these are the things I believe strongly in. The DA has also demonstrated good governance like no other party in South Africa. Its credentials as a party of non-racialism – people can say what they want about it being a “white party” and all that – are solid. Just go to any of our party congresses or public meetings and you will see this for yourself.

The conduct of presiding officers in Parliament left a lot to be desired: they did not obey the rules. They applied them arbitrarily, in the most biased ways. This was all done to protect the ANC. Secondly; Parliament became a very hostile and aggressive environment since the EFF came in. I’m not saying DA members are saints but there is a certain decorum associated with being in Parliament. The EFF just did not have respect for that at all.

Do you think Parliament does a good job of holding the Executive accountable? If not, how can this be improved?

Not at all! Just one an example: Parliamentary questions take a very long time to get responded to. Every year we do an analysis of which questions are answered and which are not. The DA submits probably three to five times as many questions as any other political party and a lot of them are not answered. If they are answered, this is done in such a bad way that the information given is not usable at all.

Secondly, Ministers do not appear frequently enough in Parliament and if this were in any other Parliament in the world, Ministers would have to be present at every sitting, so that when a Member raises a question, the Minister can stand up and deal with the question on the spot. That does not happen here. In the case that a Minister is asked a direct question, he can get away with a non-answer because he is always protected by the Speaker.

In a democratic Parliament, like in the UK for instance, before someone becomes the Speaker they resign from their own party to prevent being beholden to anyone in the performance of their role. In that way, when a Minister is trying to evade questions, the presiding officer is in a strong position to say: Minister, you have not answered the question.

My party has repeatedly said we are in support of the proposals in the Van Zyl Slabbert Report of 2002 in which he said the best solution would be a mixed system where you have both direct constituency based elections and those designed along proportional representation lines.

Is Parliament’s public participation model adequate or robust enough in the run-up to the passing of legislation?

I think it is a “yes and no” answer. I’m not sure that we really get the right people to comment on the issues under legislation when we go out on road shows around the country. If you take the recent public participation hearings on the Traditional Initiation Bill for instance, some of the most affected people, namely the mothers of these young initiates, and actually the initiates themselves – they were outnumbered by the traditional leaders and other traditional authority figures. So you get one side of the argument, from those causing the problem as opposed to those experiencing the problem.

That said, I do think that we have a fairly robust public participation process, particularly now that the Constitutional Court has ruled on it, as in the recent case on the Restitution of Land Rights Bill, where the Court ruled that there had not been enough public participation.

What are you passionate about? This applies both politically/professionally as well as personally.

I am driven by the need to provide a better South Africa. I have two kids, and my daughter is going to University next year. When she is done I want her to have a job in a growing economy and a country where she feels safe and wants to live in; a country in which to have her own children and grow old. That is what drives me. I do not want to leave South Africa, I love my country. I had a good corporate career, but I gave it up because of my passion to make a change in South Africa, and I still think I am making that change in small ways. Of course we all want great changes but by taking these small steps we will eventually get there.