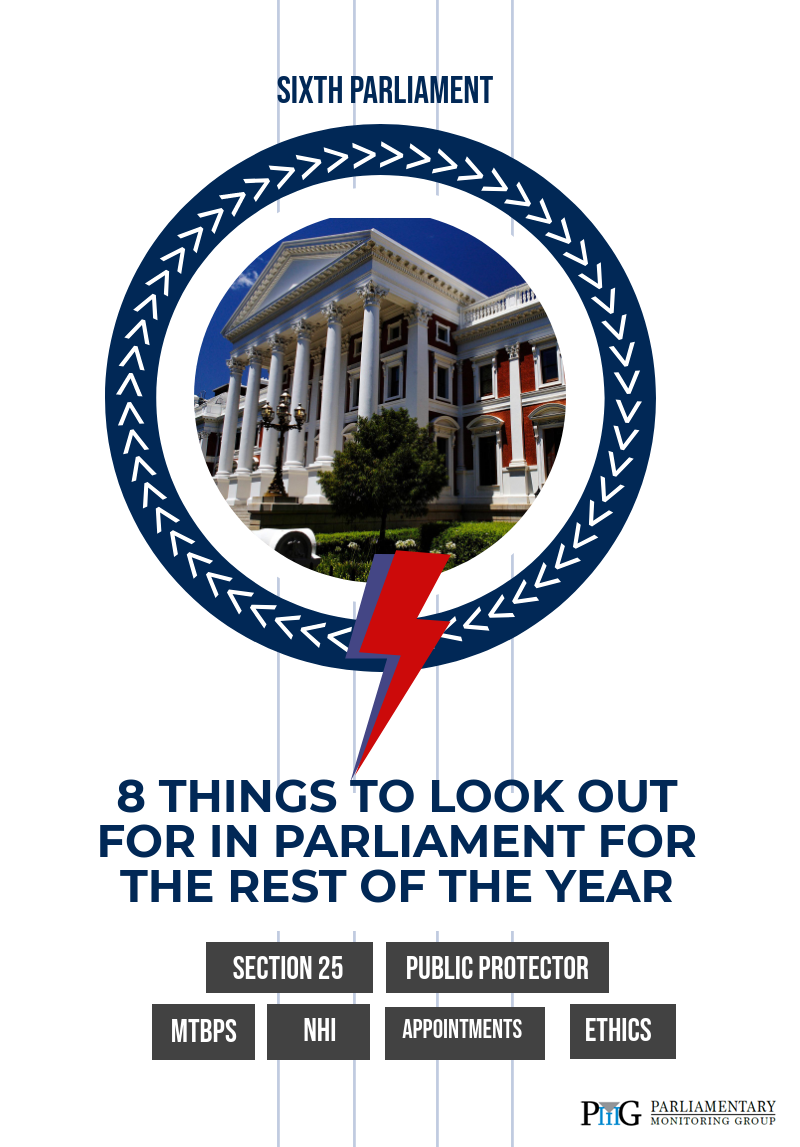 With the first term of the Sixth Parliament having come and gone, and the better part of its programme having been dedicated to the induction of incoming Members, establishment of Committees as well as the passing of the budget, the remainder of 2019 is expected to be busier on all fronts.

In this blog, we highlight some of the developments to look out for.

The main highlight on the legislative front is the introduction of the much-contested National Health Insurance Bill by the Minister of Health. With the Minister indicating SA is “one step closer” to universal health care for all, the Bill states that a National Health Insurance Fund would be established as an “autonomous public entity” to “pool the allocated resources in order to procure healthcare services, medicines, and health-related products from healthcare service providers and suppliers that are certified and accredited.” The Bill has been classified as a section 76 bill and will be subject to detailed scrutiny by both Houses. The preliminary reactions suggest there will be protracted deliberations and much haranguing amongst stakeholders and MPs from the various parties represented in Parliament. The Portfolio Committee on Health will be meeting with the Minister this week for a briefing on the Bill. This will be the initial foray and the expectation is the Committee will call for public comments on the Bill soon. There are already questions about the constitutionality of the Bill from the main opposition, the DA. The FF+ has also come out in opposition saying it was already hurting the economy, referencing the drop in medical scheme providers’ share prices following its tabling before Parliament. It will be interesting to see how these discussions pan out going forward.

As MPs ease into their roles in the Sixth Parliament, many will be watching to see whether the rigour and oversight assertiveness, exhibited by the opposition in the previous Parliament, will be a feature in this Parliament. Robust and occasionally heated engagements have already been witnessed in plenary sessions during Budget Votes debates. It might be useful to also observe whether adequate time for thorough consideration of legislation on one hand, and robust scrutiny of government on the other is allowed.

With ministries and departments having been recently constituted, the response rate to written questions is uncharacteristically low in the first term but is expected to improve. While the response rate is of importance, the quality of those answers is just as vital and should be scrutinised.

Attendance by Members of the Executive has been a perennial issue and can hamper proper oversight.

“We have noticed over the years that attendance at committee level is left to officials. Nothing wrong when they are properly delegated, but please remember we hold the executive to account. Therefore, the temptation for the ministers to be hands and ear –off from the financial execution of the business can be detrimental if things are done wrong. So perhaps we must re-understand the reason for the PFMA and the MFMA when the executive authority is and must be held responsible but pleads innocence.

The Leader of Government Business will be kept busy liaising between Parliament and the cabinet. The President will get reports on attendance especially on debates and questions sessions”. Speaker of the National Assembly

The Executive ought to be accountable, collectively and individually, to Parliament for the exercise of their powers and the performance of their functions.

Amendment of Section 25 of the Constitution

It is a fact that land is a highly divisive and emotional issue in South Africa. People have strong views on the topic. It is inevitable that any proposal dealing with property rights is going to cause a political tremor and eclipse everything else.

In February 2018, the Joint Constitutional Review Committee was mandated by the National Assembly and the National Council of Provinces to investigate mechanisms through which land can be expropriated without compensation. This set in motion a process that resulted in unprecedented levels of interest and submissions. Public hearings –spread out across all 9 provinces - were often packed to capacity as South Africans from all walks of lives participated in the process. At times Parliament was overwhelmed and battled to cope with the 630 000 written submissions. It even hired an outside service provider to help but this brought its own challenges and complications.

As expected, there was no unanimity on this and ultimately the majority view prevailed, which recommended that Section 25 of the Constitution be amended to make it explicitly clear that expropriation of land without compensation by the state in the public interest should be one mechanism to address the injustices of the past.

Process-wise, a Constitutional Amendment Bill – to give effect to the report – must be introduced in the National Assembly. Before introduction, the Draft Bill has to be gazetted for 30 days to allow for public comment. Upon introduction, the Bill will be subjected to the normal scrutiny and public participation process. As the Bill will seek to amend a section of the Bill of Rights, at least two thirds of National Assembly MPs must support it. The National Council of Provinces can only pass such a Bill if at least six provinces support it.

Some Committees are under pressure to meet constitutional court deadlines to fix defects in certain laws and will be tabling Committee Bills. A concern was expressed that the Constitutional Court will increasingly read-in provisions in legislation if the deadlines are not adhered to. The National Assembly Programming Committee agreed that that there should be a timeline wherein defects needed to be remedied and that timeline should be processed through the Office of Leader of Government Business. It should only be in exceptional circumstances that Parliament is not able to meet the deadline. There are currently 12 Acts that fall in this category and a few of them have to be corrected before the end of the year.

During the course of the year, Parliament is expected to recommend appointments to key positions, namely, Deputy Auditor-General and Deputy Public Protector. The Portfolio Committee on Police will also consider the appointment of a permanent Executive Director of the Independent Police Investigative Directorate

It will be useful for the public, particularly civil society organisations, to draw lessons from past public appointment processes and make input into the determination of standards, procedures and principles that these upcoming leadership appointments should be held to.

There is mounting pressure on Parliament to conduct an inquiry into the Public Protector’s fitness to hold office. The Sixth Parliament was barely underway when the Speaker received a request from the DA to initiate proceedings to remove the Public Protector. The Speaker officially referred the request to the Portfolio Committee on Justice. This Committee has laid out that it will begin looking into the matter on 3 September. Removal of the head of a Chapter Nine Institution is unprecedented and has brought to the fore glaring gaps in legislation and rules should there be a need to initiate such process. The Committee is bound to face a tough time as it navigates the unchartered terrain, if the PP’s response to the previous Committee is anything to go by. Commentators have speculated on the line the ANC caucus is likely to take.

Parliament is considering putting in place a process to be used in handling an inquiry (if they pursue such a route) to avoid any pitfalls and ensure that the process is legally sound.

This same Committee is also dealing with another removal process, that of Advocates Nomgcobo Jiba and Lawrence Mrwebi from office at the NPA. An agreement was reached by Speaker of the National Assembly and parties involved in the urgent interdict sought by Adv Jiba to stop President Ramaphosa from removing her and Adv Mrwebi from office. Parliament will pick this matter up again on 19 September.

_“Honorable Members, to maintain the trust and confidence of those that elected us, we must always display the highest levels of integrity. In this regard, members must, among things, disclose their financial interests – a process that the Sixth Parliament will commence shortly”.

“The turn-around time of complaint handling and investigations in respect of allegations of breaches of the Code of Ethics must receive attention. The staff complement in the Office of the Registrar of Members' Interests has been identified for priority. It is anticipated that a dedicated staff will be appointed to conduct investigations and complaints handling”._ Speaker of the National Assembly

Will MPs submit their financial declarations in time? According to the Code of conduct, the first disclosure must be within 60 days of the opening of Parliament or 60 days of their appointment as a Member if they were not sworn in at the opening of Parliament. After the first disclosure Members must disclose annually at a time determined by the Committee. There has been a growing trend of MPs missing the deadline and requiring extensions. There has also been controversy about whether these disclosures are always full and accurate. This is something to look forward to given the Speaker’s pledge to review the Code of Ethical Conduct and Disclosure of Members' Interests in order to strengthen the ethical standards to which Members of Parliament must adhere to.

Lastly, another highlight of the remainder of the year would be the delivery of the Medium-Term Budget Policy Statement by the Minister of Finance in October, which would present an opportunity to take stock of the strides taken so far, as relating to the macro-economy.

Through its Committees, the National Assembly annually compiles Budgetary Review and Recommendation Reports (BRRR) during this time to assess the service delivery performance of departments given available resources.

Previously, there have been concerns that the timelines for processing the Budgetary Review and Recommendation Report by economic cluster committees were too tight and onerous. It is yet to be seen whether calls by stakeholders to have Parliament facilitate meaningful participation in the budget cycle activities would be heeded and followed through. Interested stakeholder will do well to note whether Parliament would ‘institutionalise’ its amendment powers and make any material revisions to the Budget going forward.