2019 MTBPS: Processing of the mini-budget by Parliament 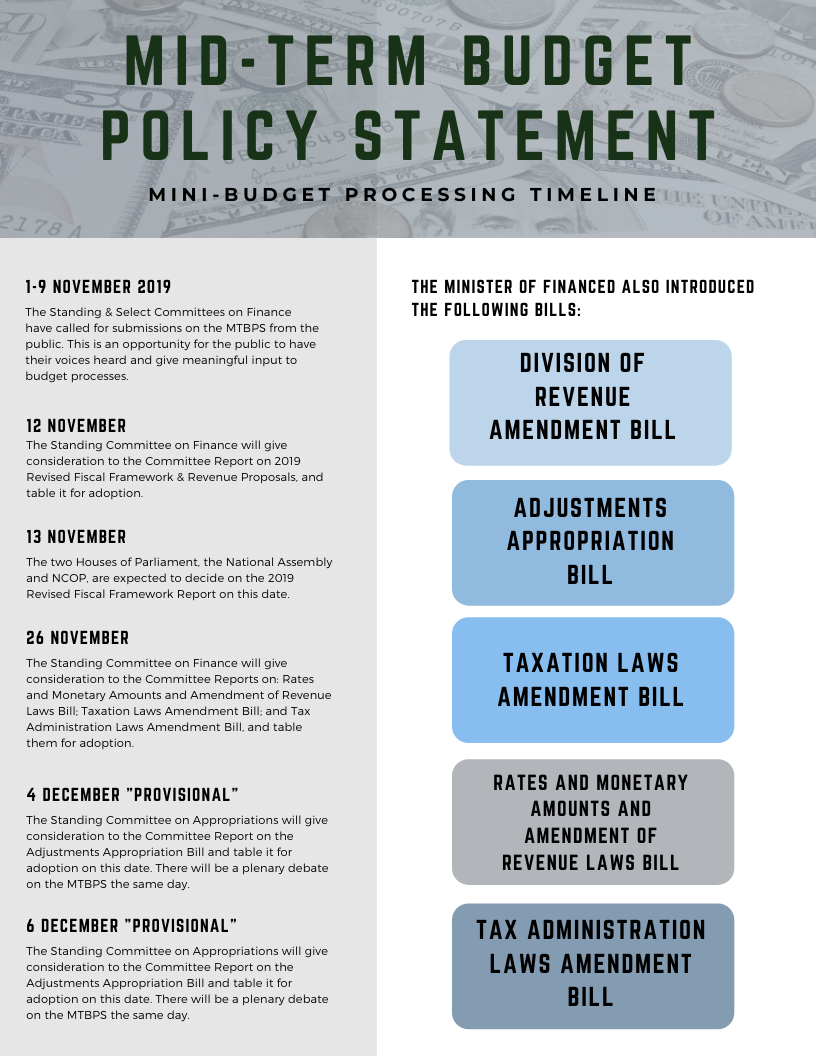 With the much-awaited presentation of the Medium-Term Budget Policy Statement (MTBPS) having come and gone, our weekly blog gleans into the role of Parliament in the processing and approval of the mini-budget.

A budget is the most important economic policy tool of a government explaining its priorities. Government budgets provide a comprehensive statement of the priorities of a nation. As the representative of people, Parliament is liable for ensuring that the budget best matches citizens’ needs. This power is predominantly important in these times of fiscal consolidation that demand deliberate prioritisation and oversight of the budget expenditures. It is no accident that strengthening the capacity and role of Parliament within the budget process is now commonly linked to increasing democratisation and development the world over.

Together with the State of the Nation Address and the February Budget, the October/November mini-budget statement is one of the most important presentations before Parliament in the year. The adjustments process provides an opportunity to make permissible revisions to the main February Budget, in response to changes that have affected the planned government spending for the year. Therefore, Parliament is embodied with one of the crucial roles in the entire budgetary process. In tabling the MTBPS on 30 October 2019, the Minister met his obligation under the Public Finance Management Act (PFMA) that requires the Minister to table multi-year budget projections for revenue, expenditure and key macro-economic projections on an annual basis. During the tabling of the 2019 Revised Fiscal Framework and Revenue Proposals (MTBPS), the Minister of Finance concurrently introduced five Bills as follows: Division of Revenue Amendment Bill; Adjustments Appropriation Bill; Rates and Monetary Amounts and Amendment of Revenue Laws Bill; Taxation Laws Amendment Bill; and the Tax Administration Laws Amendment Bill. For the mini-budget, together with the said Bills to become law, they have to be scrutinised and approved by Parliament.

Role of Parliament in MTBPS processing

Generally, Parliament plays an authorisation, oversight and supervisory role in the budgetary process, thereby ensuring transparency and accountability. It will thus scrutinise and approve the 2019 Revised Fiscal Framework and Revenue Proposals and authorise the expenditures necessary to respond to these proposals, and hold government to account for their implementation and the utilisation of the corresponding resources. As the representative body of the people, Parliament is the appropriate institution in which to ensure that the budget proposals best match South Africa’s needs with the available resources.

Economic cluster parliamentary committees (Standing and Select Committees on Finance and Appropriations) will play a crucial role in the MTBPS processing, and are essential instruments for ensuring parliamentary oversight of the mini-budget. These committees are important for coordinating Parliament’s response to proposed government priorities. Therefore, the centrality of expertise throughout these processes cannot be downplayed. Mindful of this, the Parliamentary Budget Office (PBO) and the Financial & Fiscal Commission (FFC) (staffed with economists, social scientists and other experts), together with Parliament’s own research unit, will provide much of the analytical and information resources crucial to the proper scrutiny of the budget proposals.

The mini-budget will be processed in a prescribed manner as outlined in the Money Bills Act. The timelines are as follows:

Parliament has slated this date for consideration and possible adoption of the five aforementioned Bills.