The Week Ahead: Deputy President in the NCOP, debates and question time 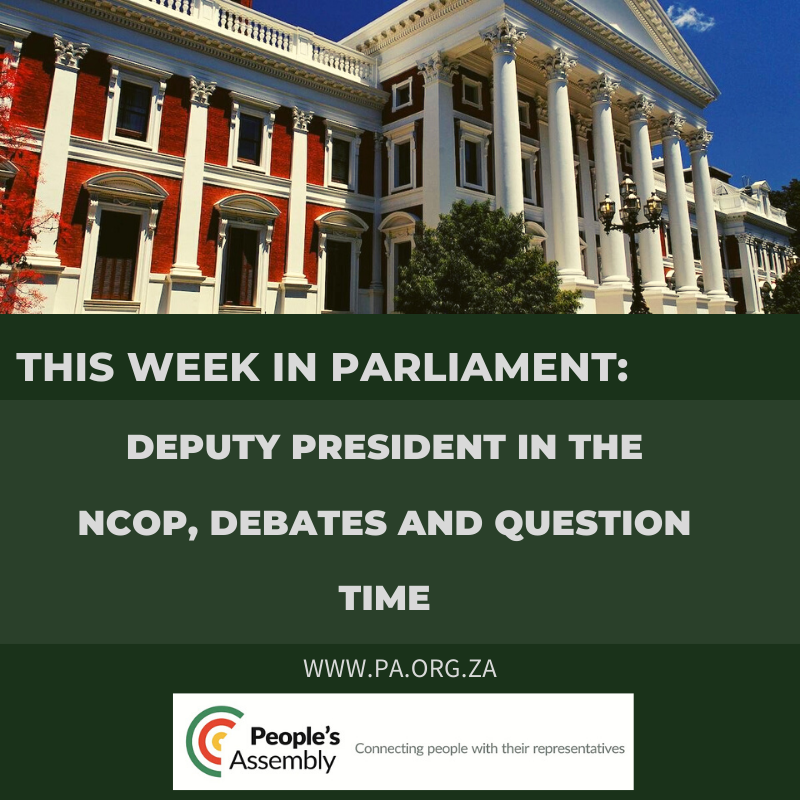 The endgame of the parliamentary year is fast approaching. There are only five weeks left before the legislature rises and loose ends are gradually being knitted together.

Following last week’s presentation of the Medium-Term Budget Policy Statement (MTBPS), Parliament’s role in the processing and approval of the mini-budget kicks into gear this week. The adjustment process provides an opportunity to make revisions to the main February Budget, in response to changes that have affected the planned government spending for the year.

Question Time is the main chamber business in the NCOP. It is one of the ways Parliament scrutinises the work of government and holds it accountable.

It is an opportunity for any lawmaker to directly question the Executive (President, Deputy President and Ministers) about matters for which they are responsible. Many of the questions touch on bread and butter issues and/or high-temperature business and the responses are generally newsworthy. An interesting part of the exercise is how the questions are structured as MPs simultaneously try to get their talking points across and ask a question.

On Thursday, the Deputy President will be probed on a range of issues including critical asset maintenance strategies, stimulating rural/township economies, climate change and developments in Uganda.

Meanwhile, select Ministers in the Economic Cluster will appear on Tuesday. View the questions here

In the NA chamber, the main excitement will be Thursday’s two mini-plenary sessions i.e. breakaway sessions of the National Assembly. According to the rules, any matter may be discussed or debated in a mini-plenary session. The same rules also allow MPs to propose a subject for discussion – this mechanism provides an opportunity for the House to debate a particular topic without being required to take a decision at the end of the debate.

South Africa is recognised as a water-scarce country. In recent years, dam levels across large parts of the country have dropped drastically and cities have had to impose emergency measures, including rationing, to save dwindling water supplies. There are many theories about what is causing this crisis. research indicates it is a combination of factors including low rainfall, rising temperatures and climate change; high water consumption and wastage by citizens; badly planned and poor maintenance of infrastructure and the commodification of water resources. The planned discussion on South Africa’s deepening water crisis - Challenges and solutions for a water-scarce country is therefore noteworthy and timely.

The second topic for discussion is on: Advancing the African Union Agenda 2063 within the context of the twin pillars of economic development and security

Beyond this, the plenary agenda is filled with the usual items: legislative business, motions, statements, processing of statutory appointments, international instruments and assorted Committee Reports.

There’s lots of action in Committee-land. Legislation, mega-important spending decisions and headline-grabbing hearings dominate the Committee corridor. Here is a run down of the highlights:

The Economic cluster parliamentary committees (Standing and Select Committees on Finance and Appropriations) will play a crucial role in the MTBPS processing, and are essential instruments for ensuring parliamentary oversight of the mini-budget. These committees are important for coordinating Parliament’s response to proposed government priorities. Therefore, the centrality of expertise throughout these processes cannot be downplayed. Mindful of this, the Parliamentary Budget Office and the Financial & Fiscal Commission (staffed with economists, social scientists and other experts), together with Parliament’s own research unit, will provide much of the analytical and information resources crucial to the proper scrutiny of the budget proposals. Meetings and hearings are set for Tuesday, Wednesday and Friday)

Outstanding municipal debt for water is putting some water boards at risk of going under and affecting the ability of the Department of Water and Sanitation to maintain infrastructure. For a third successive week, MPs will be meeting with stakeholders to discuss how to tackle this problem (Tuesday).

Lawmakers will attend a workshop on Section 139 Interventions in Municipalities. This constitutional provision empowers provinces and national government to rescue municipalities troubled by service delivery, governance and financial management challenges. According to the Public Affairs Research Institute section 139 interventions are seldom implemented, leading to the total collapse of municipalities. (Tuesday)

The Department of Environment, Forestry and Fisheries will brief MPs on government’s readiness for UNFCCC Climate Change COP25 conference, scheduled to take place in Spain from 2 to 13 December 2019. (Tuesday)

The Portfolio Committee on Home Affairs has arranged a broad agenda and will get updated from the Department on: resolving the network downtime at the DHA offices; procurement process of the Automated Biometric Information System and the litigation case management system. (Tuesday)

The Sub-Committee interviewing candidates to fill the vacancy of Commissioner at the Public Service Commission will interview the final batch of candidates and make a recommendation to the House. (Tuesday)

The funding of the post-school education and training sector will be in the spotlight during the colloquium organised by the Portfolio Committee on Higher Education, Science and Technology. (Wednesday)

Legislators will get an update on the extent and nature of contract appointments in national and provincial departments and the revised Ministerial Handbook. (Wednesday)

Parliament’s 2018/19 performance will be under scrutiny when the Secretary to Parliament briefs the Joint Standing Committee on the Financial Management of Parliament about this. (Wednesday)

The Adhoc Committee established to initiate and introduce legislation to amend section 25 of the Constitution will hold a two-day workshop with experts on the question of land and constitutional matters. According to the Committee’s draft programme, a draft Bill is likely to be published in the Government Gazette on 10 December 2019, after which, a public awareness drive will start. The official call for public comments is expected to come to an end towards the end of January 2020 and will be followed by public hearings in February. The Committee intends to intends to finalise the programme at the end of March 2020. (Wednesday and Thursday)

The Joint Standing Committee on Defence will discuss procurement challenges with the Department of Defence. (Thursday)