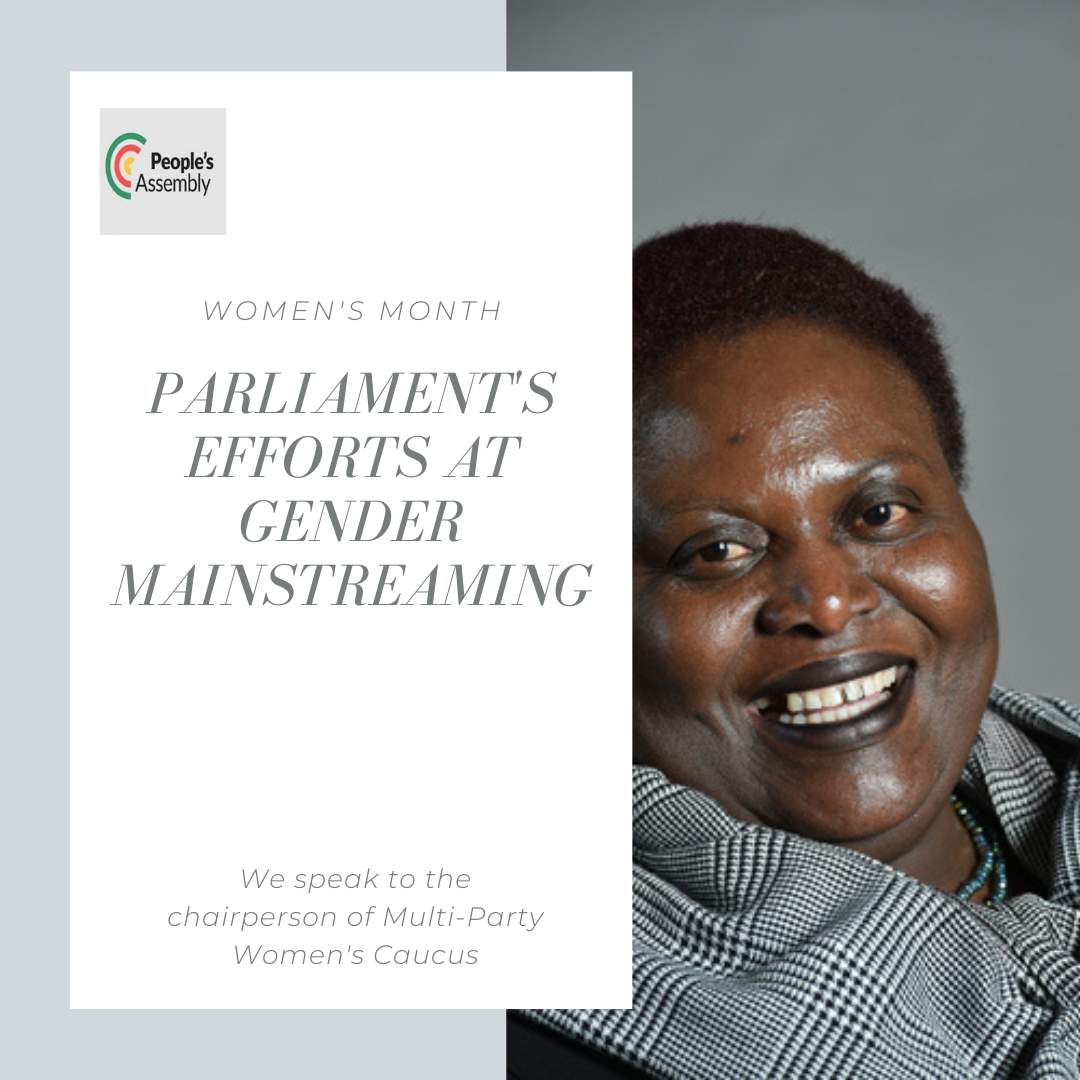 In this blog, we attempt to find out what efforts Parliament has made in ensuring that the process of law making is gender responsive. We spoke to the Chairperson of the Multi-Party Women's Caucus of Parliament, Ms Nkhensani Kate Bilankulu, and this is what she had to say.

What are your thoughts on the current state of legislation regarding the protection of women and other vulnerable groups in society?

We have a number of very progressive laws that specifically provides protection for women and vulnerable groups and these include the, Promotion of Equality and Prevention of Unfair Discrimination Act, Domestic Violence Act (currently being amended), Protection from Harassment Act, Children’s Act (as amended), Older Persons Act, Recognition of Customary Marriages Act (as amended) etc. Despite having these laws aimed at protecting women and other vulnerable groups, adequate protection is yet to be realized, and this can be due to various factors including lack of effective implementation of available laws, sporadic efforts by multiple role players, as well as issues related to oversight.

Do you think that the political parties currently represented in Parliament are gender sensitive and push for policies that protect women?

I believe that the establishment of a Multi- Party Women’s Caucus in Parliament is one of the attempts by the Legislature to ensure gender sensitivity. The Multi Party Women’s Caucus is a platform for women Parliamentarians to champion gender equality and women’s issues inside and outside of Parliament, across party political lines. In addition, we have seen an increase in the number of women representation in Parliament, which is the result of voluntary gender quotas set by certain political parties. There is still more that needs to be done to ensure that all parliamentary activities are gender sensitive, including persuading all political parties currently represented in Parliament to adopt gender quotas to increase women representation and participation in politics.

I believe we need more resources for programs aimed at gender mainstreaming, including adequate funding of the gender machinery, and capacity building. This will ensure that gender mainstreaming initiatives are prioritized and properly programitised all year long for maximum impact and not be event based. I don’t think we have sufficient resources for gender mainstreaming but that is due to the country’s economic status. This is why it is important to have partnerships with private donors and other developmental partners to augment our funding shortfalls.

For the first time in 2020/21, the National Treasury’s Medium-Term Strategic Framework (MTSF) guidelines included a focus on gender, youth, and persons with disabilities. What are your thoughts on this?

Do you believe that the national budget is responsive to the plight of women?

At the present moment, the national budget is not yet fully gender responsive, but we are moving in that direction. The country has just adopted the Gender-Responsive Planning, Budgeting, Monitoring, Evaluation & Auditing Framework. The aim of this Framework is to bring about country wide reforms where advancement of women is at the core of all government processes from policy, planning and budgeting up to resource allocation.

- Research, planning, budgeting, monitoring and evaluation and gender auditing, policies, programmes, and systems; and many policies are gender blind/silent.

What are your thoughts, and do you think that there are barriers that have hindered progress with gender mainstreaming in South Africa?

It is true that we have seen some regression in relation to gender mainstreaming. Indeed, there are various barriers that have compromised the gains we had when it comes to gender mainstreaming. In addition to the above mentioned, we can also include funding related challenges, especially funding of gender machinery, such as the Department of Women, Youth and Persons with Disabilities and CGE. There is also an issue of implementation of laws as mentioned in one of the questions above. What is critical is being aware of this regression and its causes so as to address them.

What message can you share with women in commemoration of Women’s Month?

My message to women is: “Our social activism for the advancement of women is a 365 days’ commitment every year. We need to be vigilant throughout the year. We also need to understand that gender equality will be achieved if efforts include men and boys. The empowerment of men and boys must be a priority especially in the light of so many teenage pregnancies.”

If you are curious about what gender mainstreaming means, and other concepts used in gender equality discourse, please refer to this useful Gender Toolkit prepared by the Inter-Parliamentary Union here.

We would like to thank Ms Bilankulu for her contribution to this blog.

To learn about Ms Bilankulu, check out her profile here.