As we wrap-up youth month, we spoke to a youth activist on the challenges facing the youth. Thamsanqa Masingi offers a perspective on why young people should be actively engaged in the democratic process. 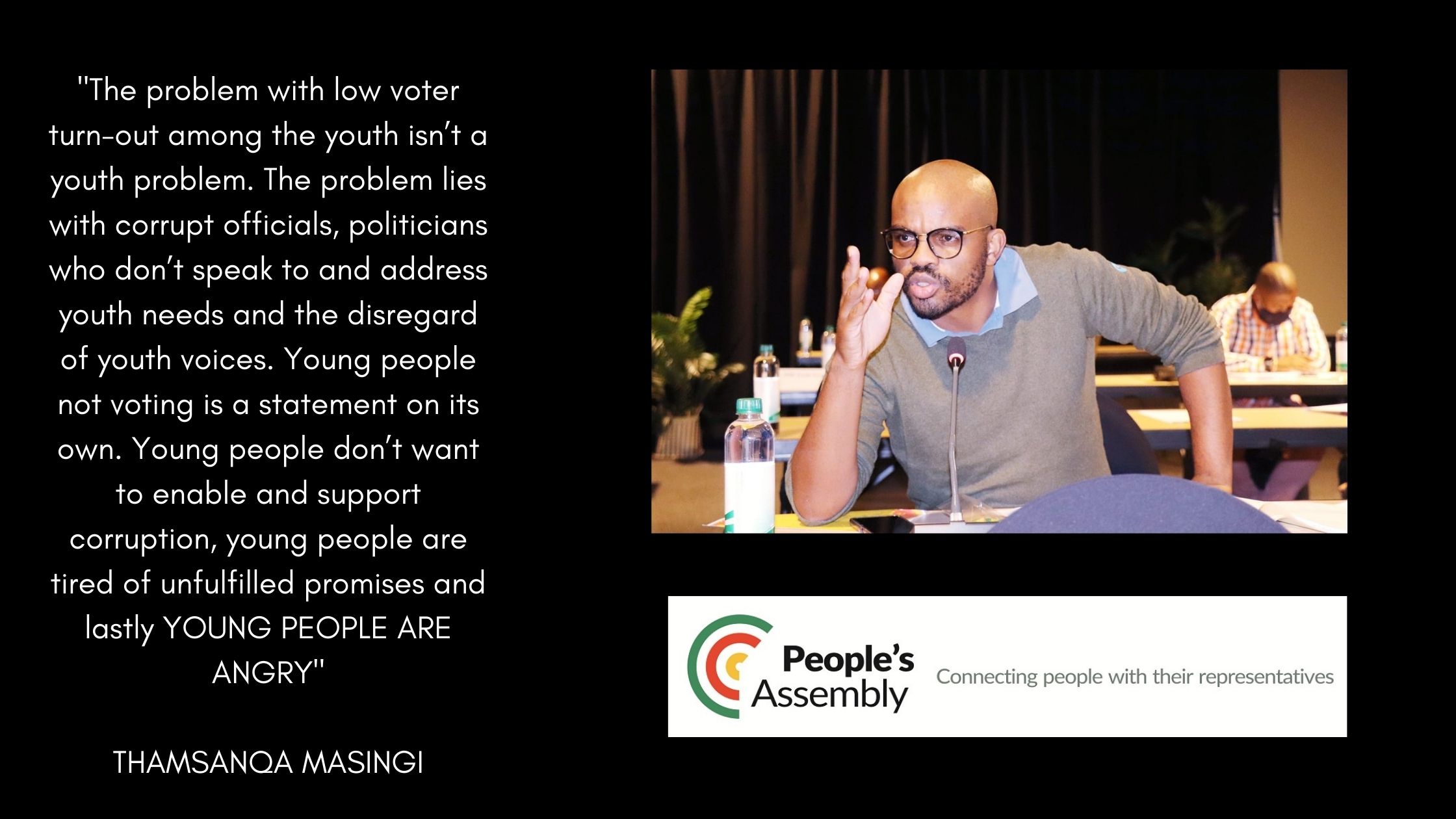 It is youth month, and once again the focus is on young people and the challenges that they face in South Africa. Some argue that this day/month is used to “tokenise” youth issues and to date there hasn't been much development for young people in this country. Do you agree? What does youth day/month mean to you?

I agree, whole heartedly. A friend of mine asked me how I feel about June 16 activities, my immediate response was “meh”, because a lot of youth day programs by the government are performative and are laced with empty promises.

Whenever I think of what took place in ’76 and why, the first thing that comes to mind is this quote: “our parents are prepared to suffer under the white man’s rule. They have been living for years under these laws and they have become immune to them. But, we strongly refuse to swallow an education that is designed to make us slaves in the country of our birth.” I am not sure who the quote belongs to, however it frames quite well the agenda of the time. Young people were fighting an oppressive regime and the education that was being shoved down their throats, would essentially render them second class citizens in their country of birth.

Fast forward to democratic South Africa, young people are fighting for access to quality education. So, what has really changed? We have seen universities of technology fighting against fees and financial exclusions year after year with little to no regard from government and the media, up until your Wits, UCTs and UJs joined the fight in what is now remembered as #FeesMustFall.

What does active citizenry mean for you as an activist working with young people?

Every time I’m asked this question, I like to reference the Preamble of the South African Constitution:

“We, the people of South Africa,

Recognise the injustices of our past;

Honour those who suffered for justice and freedom in our land;

Respect those who have worked to build and develop our country”

The freedom and rights we enjoy today came at the expense of our ancestors sacrificing their lives and time with family. It’s our civic duty as citizens to safeguard our democracy and to ensure that we grow it as much as possible. What this means is taking time to participate in public participation processes that will firstly grow and enrich our democracy and our communities and secondly create a culture of accountability.

No one person can do everything, however, everyone can do something. Being an active citizen is as simple as attending community meetings, reporting a street light and upholding the laws and values of your community. Part of the concept of active citizenry is making sure that one is deliberate about exercising their democratic right to vote. For me it also means being aware of your environment and taking action towards positively impacting your community.

Do you believe that young people no longer see the point of voting? Do you think that voter apathy exists amongst young people?

L.O.L!!! Youth are the problem right? I don’t think we have a case of voter apathy among the youth, we have a case of young people who are unemployed and disenfranchised. We have people who day in day out are told about the looting and corruption at the hands of people who were meant to serve the general public. Covid-19 had a severe impact on an already weakened economy, yet that didn’t stop officials from looting and further worsening the situation that was already dire.

We did a campaign earlier in the year called My Voice Is(n’t) My Voice which was a series of dialogues with the youth across all 9 provinces in South Africa. It wasn’t a shocker. When asked why they think other young people aren’t voting, the majority cited corruption. The problem with low voter turnout among the youth isn’t a youth problem. The problem lies with corrupt officials, politicians who don’t speak to and address youth needs and the disregard of youth voices. Young people not voting is a statement on its own. Young people don’t want to enable and support corruption, young people are tired of unfulfilled promises and lastly YOUNG PEOPLE ARE ANGRY!

How do you encourage young people to vote in the work that you do at Activate leadership?

We have a civic education programme with the overall goal of promoting active citizenry and creating an environment in which we empower young people to interrogate, question and continuously hold political representatives to account through legitimate, non-violent and democratic means, voting being one of them.

We also run voter education campaigns as well as observer campaigns during each election year.

Apart from voting, what kinds of responsibilities do you think young people have in protecting and upholding democratic values and principles?

Do you feel that we have lost some of these values that you speak of?

Not really, I feel like a lot of us are disheartened.

Why do you feel young people should be at the centre of protecting our democracy?

We make up the majority of the population, so generally when things go wrong it is us who bear the brunt of it all. It therefore becomes our responsibility to safeguard our democracy, to ensure that there is accountability and participation by all.

Above all, if we want to see our democracy grow and benefit everyone, we have to be at the heart of coming up with innovative solutions that will positively affect us and the general population.

Lastly in "The Rise of Shaka", the late Mazisi Kunene says:

"Those who feast on the grounds of others

Often are forced into gestures of friendship they do not desire.

But we are the generation that cannot be bypassed.

We shall not be blinded by gifts from feasts.

With our own fire we shall stand above the mountains, as the sun."

We, the young people, will stand above the mountains, as the sun. 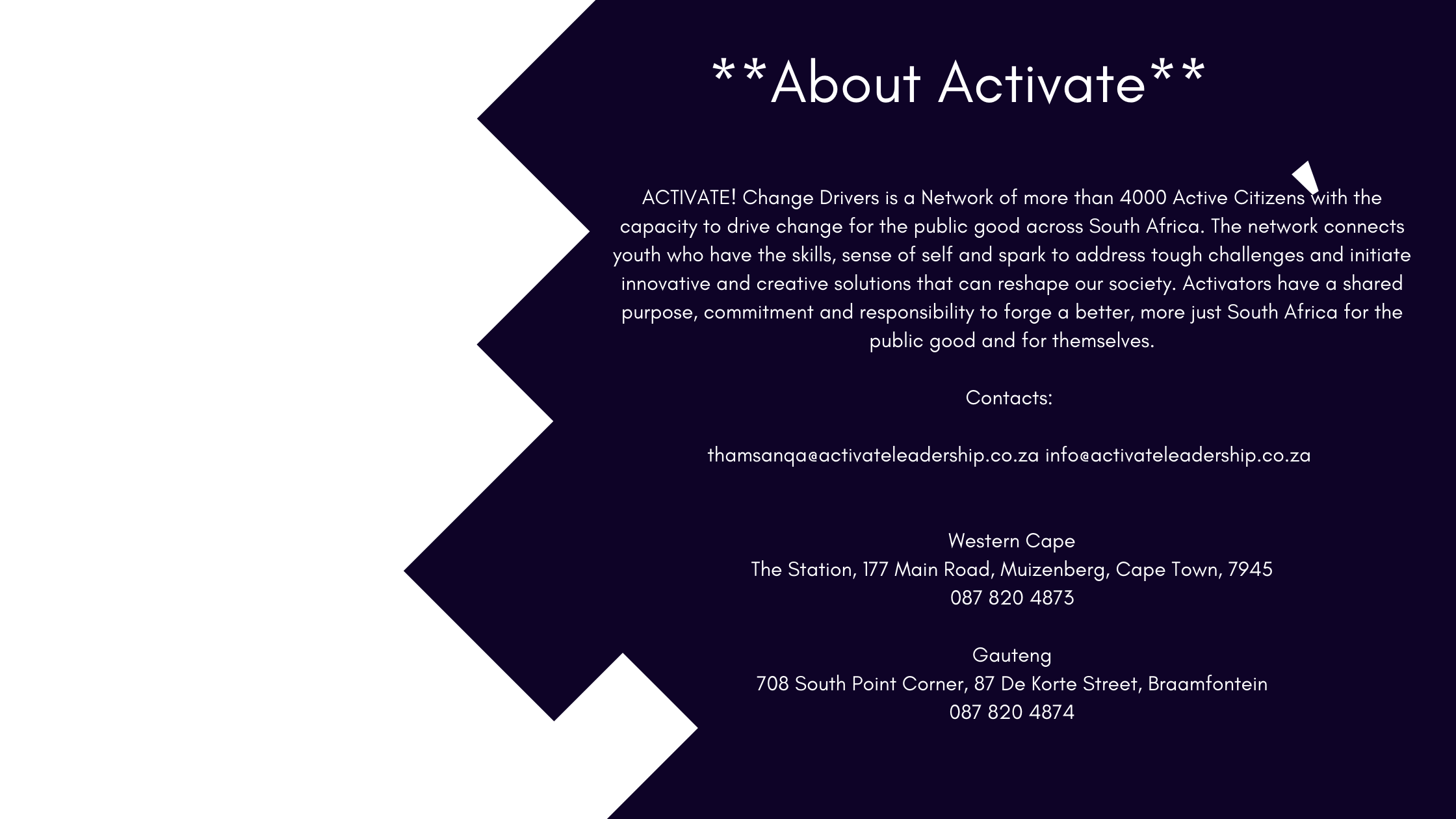