What happens after the 2019 elections?

The Constitution spells out, in section 52, that after an election, the first sitting of the National Assembly must take place at a time and date determined by the Chief Justice but not more than 14 days after the election result has been declared

Wednesday, 22 May: things really kick off post-elections when the first sitting of the National Assembly takes place. At this sitting, the Chief Justice, or another designated Judge, will preside over the swearing-in of Members of Parliament. Groups of MPs are sworn in 10 at a time, ordered alphabetically. They will swear or affirm faithfulness to the Republic and obedience to the Constitution.

The Chief Justice will also preside over the election of the President, who will be selected from among the MPs – the President starts off as a Member of Parliament but immediately ceases to be once sworn in. The President must take up office within five days of being elected

Thereafter the Speaker will be elected by way of nomination. If more than one nomination is received for the position of Speaker, an election by secret ballot is held. Counting of the ballots is done in the presence of the Chief Justice. The results are then announced in the House.

Once the Speaker is duly elected, nominations are invited for the position of Deputy Speaker of the NA. The newly-elected Speaker presides over this election. Also attending the first sitting of the Fifth democratic Parliament will be diplomats and guests of the Presidency, guests of leaders and representatives of political parties in Parliament, and members of the public.

Throughout the process, the mace, which represents the Speaker’s authority, will remain upright in front of the National Assembly podium until the newly elected Speaker is escorted to the presiding officer’s chair by the sergeant-at-arms. When the mace is laid horizontally, it signals the official start to the new Parliament.

After an hour’s lunch break the House reconvenes (at 2pm) and the Chief Justice calls for the nomination of candidates for the position of President of the Republic of South Africa. Like the Speaker and Deputy Speaker process, if more than one nomination is made, an election by secret ballot is held. Counting of the ballots is done in the presence of the Chief Justice. The results are then announced in the House. The President, once elected, ceases to be a member of the NA. 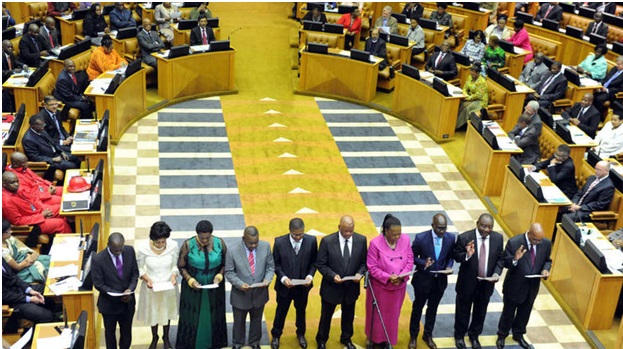 Thursday, 23 May: the first sitting of the NCOP will also be presided over by the Chief Justice. The Chief Justice will also preside over the election of the Chairperson of the National Council of Provinces, who is selected from the permanent delegates. The Chairperson will then preside over the election of the Deputy Chairperson, House Chairpersons and Chief Whip . The President will then appoint a Deputy President and Ministers to constitute his or her Cabinet – the Deputy President and Cabinet Members are selected from the Members of the National Assembly although no more than two Ministers can be appointed from outside the National Assembly

Saturday, 25 May: President Inauguration - in a departure from tradition, the event will take place at Loftus Versfeld Stadium. According to government, hosting the inauguration in a stadium, the largest in the City of Tshwane, will allow for greater public participation in this important national event. The theme of the inauguration ceremony is "Together celebrating 25 years of freedom: Renewal and Growth for a better South Africa." Aside from members of the public, it is expected that Heads of State and royalty from a number of countries will attend, as well as religious representatives, political parties, and representatives from regional, continental and international organisations and bodies such as the Southern African Development Community, the African Union (AU) and the United Nations (UN).

June 2019: Parliament also has two State of the Nation Addresses (SONA) during a general election year. People’s Assembly has it on good authority that the President will deliver this SONA between 4 and 14 June 2019. SONA marks the opening of the Sixth Parliament.