The Week Ahead: Parliament debates the President’s Address on South Africa’s Economic Reconstruction and Recovery Plan 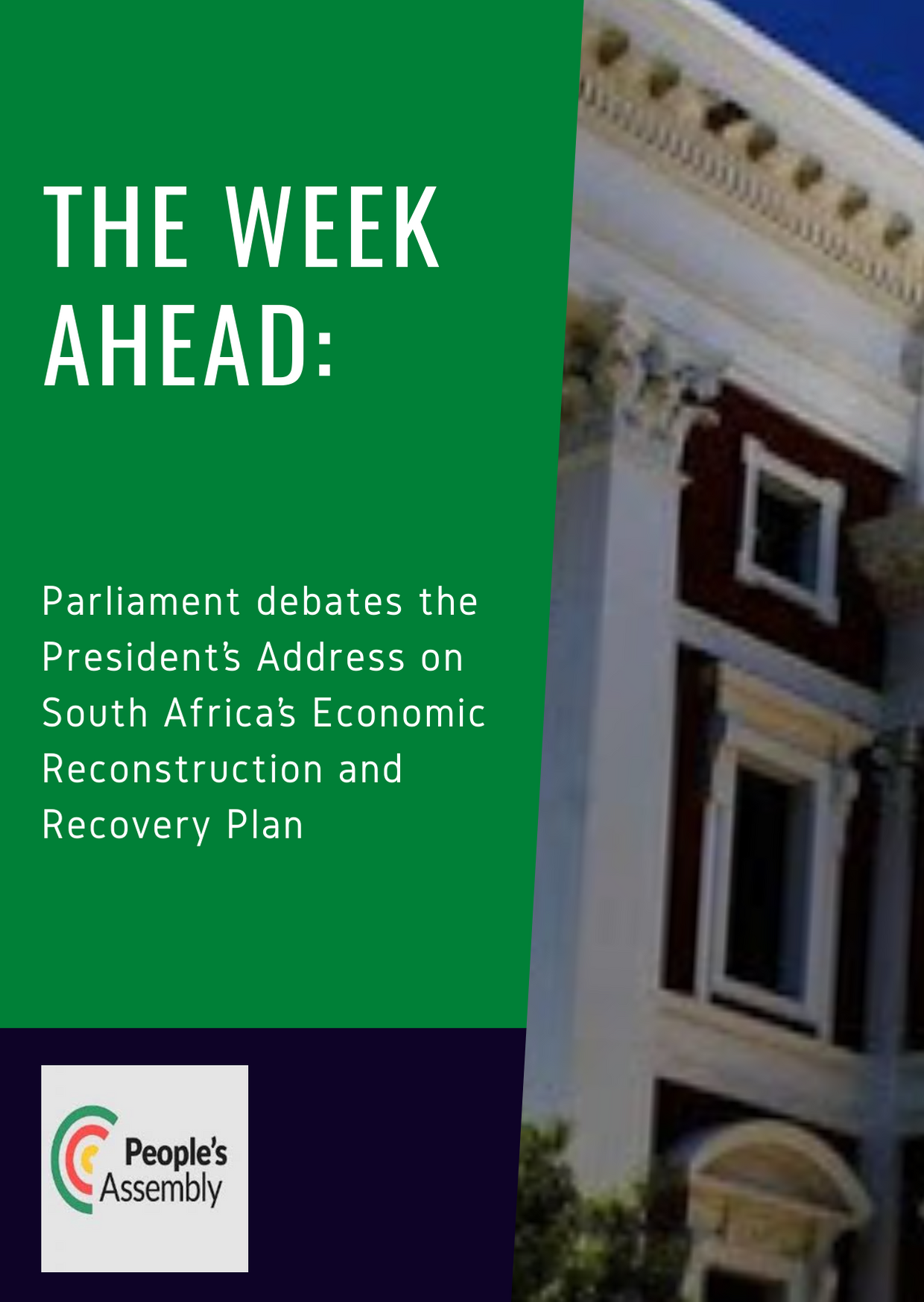 There's a full and mixed flavour to the coming week's parliamentary business.

The highlights include a joint debate, Question Time Session with the Deputy President, a Ministerial briefing, legislative business and high-profile Committee hearings.

Last week, the President addressed Parliament on the government’s Economic Reconstruction and Recovery Plan. In his speech the President indicated:

_“….the damage caused by the pandemic to an already weak economy, to employment, to livelihoods, to public finances and to state owned companies has been colossal.

“This economic shock is unprecedented in our country, and it will take an extraordinary effort to recover from it”._

Following this, MPs will get an opportunity to debate the speech during a joint sitting on Wednesday. Opposition parties have already slammed the plan and described the speech as underwhelming, with some saying the proposals were not new and did not go far enough. They also criticised the government for failing to deliver on past promises.

In the National Assembly, the Minister of Employment and Labour will make a statement on disbursement of Unemployment Insurance Fund on Tuesday afternoon. Ministerial statements are a way for Ministers to bring an important matter to the attention of the House, often at short notice. The statements address major incidents, government policies or actions. Each party will be given an opportunity to respond. During this sitting, Members will also debate condolence motions on the four MPs who passed away recently.

On Thursday, Deputy President David Mabuza, as leader of government business in Parliament, will provide oral replies to questions from Members in the National Assembly. The practice of Oral Questions and Replies is consistent with Section 92(2) of the Constitution which obligates Cabinet Members to account to Parliament for the exercise of their powers and performance of their functions and Parliament utilises this opportunity to hold the Executive accountable.

In line with the broad tasks delegated to the Deputy President, he will be probed on a variety of issues.

Over in the NCOP, the Statistician-General will brief delegates on the Poverty Index and Poverty lines in South Africa, as well as the impact of the changes in the cost of goods and services and consumption patterns to household poverty and food security.

Thursday’s plenary business includes a tribute to health care workers on the frontline of the fight against the Covid-19 pandemic as well as a tribute to the departing Auditor-General of South Africa.

Beyond this, the Women’s Charter Review continues on Wednesday and Friday. The provincial roadshow programme will take place in Gauteng and the Eastern Cape on the respective days. The decision to undertake a nationwide review process was taken during the 2019 Women’s Parliament to cover all nine provinces over the next 12 months.

Notably, the Minister of Finance was set to deliver the medium-term budget policy statement (MTBPS) this week. However, Parliament acceded to a request by National Treasury to delay the mini-budget speech by a week to 28 October. Minister Mboweni indicated his request for a postponement was due to delays in the finalisation of the President’s Economic Reconstruction and Recovery Plan, which meant the approach and consultation of the budgetary process had to be adjusted.

There’s lots of action in Committee-land. Legislation, mega-important spending decisions and headline-grabbing hearings dominate the Committee corridor. Here is a run down of the highlights:

Portfolio Committee on Communications, (National Assembly), [Briefing by the South African Broadcasting Corporation (SABC) on: (i) the Skills Audit Report; (ii) detailed expenditure patterns relating to legal proceedings; (iii) breakdown of costs associated with signal distribution by Sentech; (iv) details of all companies contracted to the SABC as well as the monies associated to the contracts; and (v) all other outstanding recommendations made by the Committee; Briefing by the Department of Communications and Digital Technologies, the SABC Editorial Forum, and the Unions (CWU and BEMAWU) on their responses relating to matters raised with the Committee during engagements with SABC internal stakeholders], Virtual Meeting Platform, 09:00-12:00

Portfolio Committee on Home Affairs, (National Assembly), [Briefing by the United Nations for High Commission for Refugees (UNHCR), South African Human Rights Commission (SAHRC) the City of Cape Town (CoCT) and the Department of Home Affairs on the integration or repatriation of the protesting refugees from the Green Market Square, Cape Town CBD], Virtual Meeting Platform, 09:00-12:00

Select Committee on Transport, Public Service and Administration, Public Works and Infrastructure, (National Council of Provinces), [Briefing by the Passenger Rail Agency of South Africa (PRASA) on the plans to deal with the damage caused by vandalism and theft of its infrastructure], Virtual Meeting Platform, 12:00-15:00

Committees provide a platform for the public to present views directly to MPs. Share your on the ground experience and expert information to the relevant committees. Critically, what questions should MPs pose to the Executive as they conduct their oversight work?

We have consolidated our reports on the COVID-19 related meetings here.