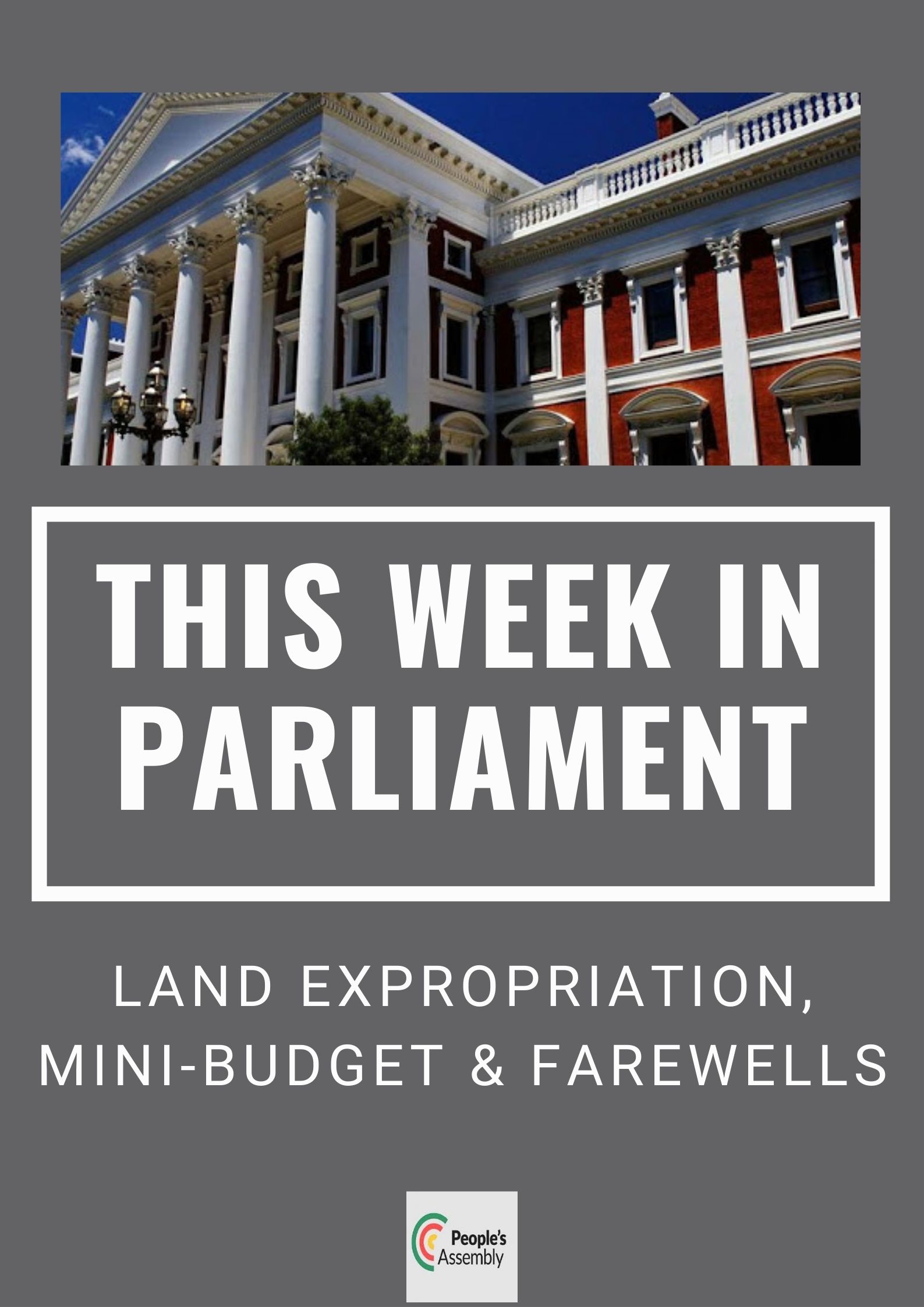 The constituency period beckons for NA MPs. They are due to depart at the end of the week and return in mid-to-late January.

Their NCOP counterparts will remain in session until 15 December.

A fair amount of work will be done before lawmakers conclude their business for the year.

There is a full and mixed flavor to this week’s agenda and there is plenty of opportunity for excitement.

After nearly 4 years of hurdles (transition from the 5th Parliament to the 6th Parliament, significant public interest, administrative challenges, numerous deadline extensions, additional amendments, legal action, wrangling about process, party consultations and COVID-19 complications), the final report of the Ad Hoc Committee to initiate and introduce legislation amending section 25 of the Constitution will be tabled and a second reading debate on the Constitution Eighteenth Amendment Bill is scheduled.

In February 2018, the Joint Constitutional Review Committee was mandated by the National Assembly and the National Council of Provinces to investigate mechanisms through which land can be expropriated without compensation. This set in motion a process that resulted in unprecedented levels of interest and submissions. Public hearings –spread out across all nine provinces - were often packed to capacity as South Africans from all walks of lives participated in the process.

A two-thirds majority is required for the land expropriation law to be passed. If adopted, the bill will be referred to the NCOP, where six out of the nine provinces are required to vote in favour of it.

Simultaneously, Parliament is processing the Expropriation Bill, which will give expression to the amendment by providing explicit circumstances under which land expropriation in the public interest may be done without compensation.

Amongst others, the NA will also consider 2 reports from the Powers and Privileges Committee and 3 from the Ethics and Members’ Interest Committee at the same sitting.

The practice of oral questions is an established part of the parliamentary day and gives MPs an opportunity to question the Executive about matters for which they are responsible.

Everything from specific scandals and programmes to big-picture policy to bread-and-butter issues and performance will be under the microscope. In practice, Question Time serves different objectives for governing party MPs and the opposition. In the case of the former, their questions are designed to give Ministers an opportunity to discuss the virtues of government policy and programmes. For the latter, it is a chance to confront the government about its actions and to highlight perceived inadequacies.

For all its limitations, this is usually an occasion of heightened interest and can be revealing.

Question time is the main chamber business on Wednesday, with select Ministers in the Governance Cluster and on Thursday, with the Deputy President.

The National Assembly will conclude its processing of the mini-budget on Friday. MPs will consider the 2021 Medium-Term Budget Policy Statement (MTBPS), the Adjustments Appropriation Bill and accompanying votes and schedules. The House will round off its programmes with farewell speeches.

Elsewhere, the NCOP will focus on legislative matters during Tuesday’s sitting: the: Division of Revenue Amendment Bill and the Municipal Systems Amendment Bill.

On Thursday, delegates will hold a debate on the 16 Days of Activism against gender-based violence. During last week’s debate in the National Assembly, lawmakers criticised the usefulness of the annual debate as government was unable to arrest the scourge. Several committee reports will also be considered.

In between, the Charlotte Maxeke Memorial lecture – scheduled for Wednesday- is a highlight on the NCOP’s programme.

The launch of the South African Parliamentary Institute – on Thursday – is an important milestone. According to Parliament, the institute will provide “capacity development programmes, production of quality research and knowledge management for Members and legislative sector officials. It will also provide advice and technical assistance to committees and office bearers in the legislative and policy related matters”.

Public hearings on the Children’s Amendment Bill will be conducted from 7-10 December.

There are plenty of interesting meetings in the committee corridor. Here is a rundown of the highlights:

Portfolio Committee on Cooperative Governance and Traditional Affairs, (National Assembly), [Engagement with the MDB and DCoG on the Report on the response to the discussions on the viability of amalgamated municipalities], Virtual Meeting Platform, 09:30-13:00

Joint Standing Committee on Defence, (National Assembly and National Council of Provinces), [Briefing by the Minister on the strategic re-alignment of the Department with its allocated funds, and alternative funding options; NCACC quarterly reports and EUC feedback], Virtual Meeting Platform, 18:00-21:00

Portfolio Committee on Environment, Forestry and Fisheries, (National Assembly), [Adoption of minutes of the previous meeting; and Briefing by the Protect the West Coast" who are working to increase awareness and protect environmentally sensitive areas along the coast that are currently threatened; Briefing by the Centre for Environmental Rights on the Climate Change Governance; and Briefing by the NGOs in the Durban South], Virtual Meeting Platform, 09:30-17:00

Committees provide a platform for the public to present views directly to MPs. Share your thoughts on the ground experience and expert information to the relevant committees. Critically, what questions should MPs pose to the Executive as they conduct their oversight work?