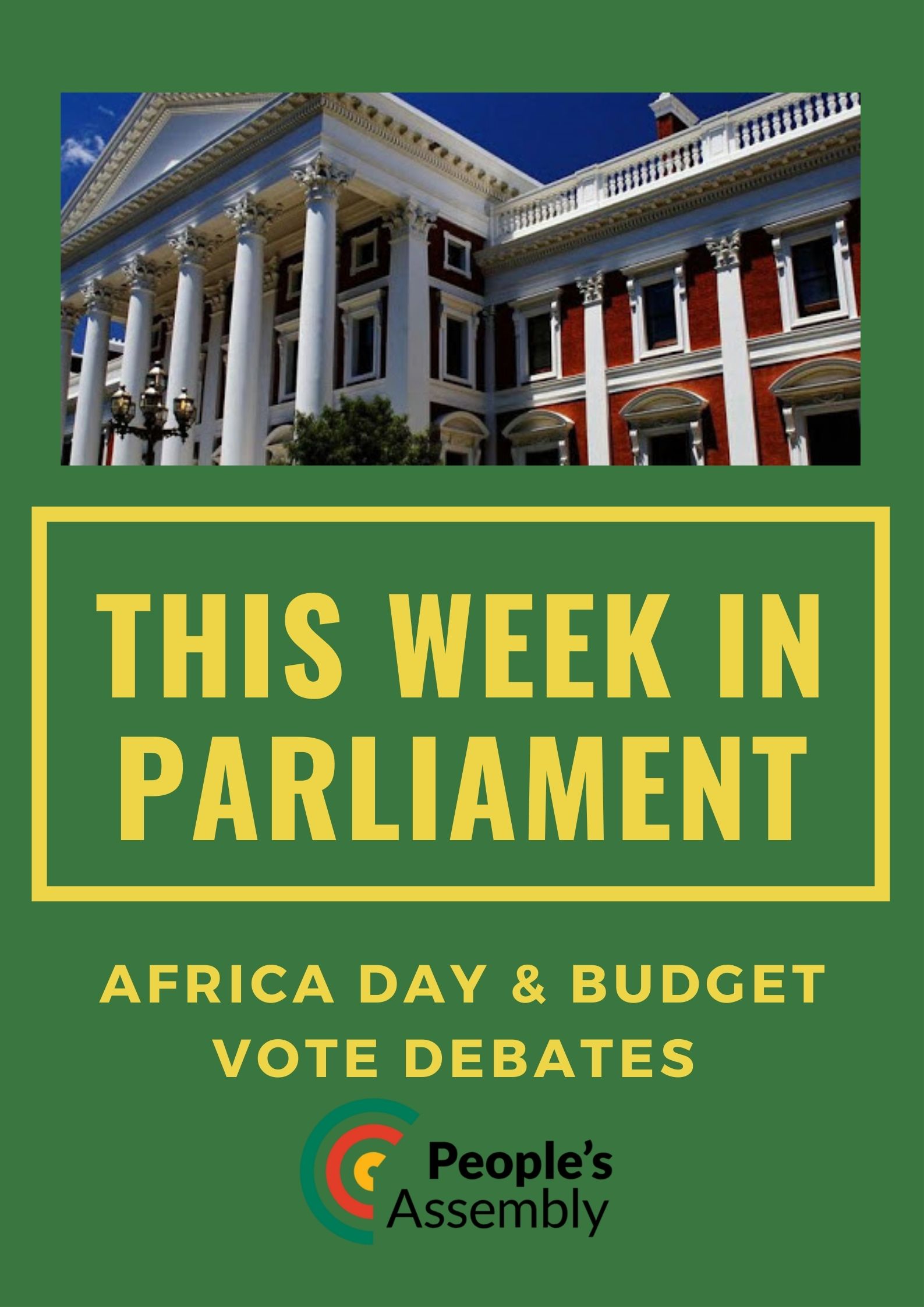 There's a full and mixed flavour to the coming week's parliamentary business.

Both chambers will hold Africa Day debates on Wednesday. In addition, the NCOP has scheduled an Africa Day lecture earlier on the same day.

On Tuesday, the National Assembly has scheduled nine Budget Vote debates. A few of the stand out ones include: Defence and Military Veterans, Public Works and Infrastructure, Home Affairs, Employment and Labour, and Police.

You can find all the budget vote speeches and responses here

The NCOP has also scheduled three sittings – from Tuesday to Thursday – where it will cover policy debates on Vote 34: Mineral Resources and Energy; Vote 36: Small Business Development; Vote 13: Public Works and Infrastructure; and Vote 38: Tourism.

During Wednesday’s sitting, the National Assembly will consider a motion recommending Mr Xolile George for the position of Secretary to Parliament. Once endorsed by both Houses, Mr George will assume his duties as Parliament’s new Accounting Officer on 01 June 2022. This will bring to an end almost five years during which Parliament has had an Acting Secretary. The position became vacant in June 2017 when the former secretary of Parliament, Gengezi Mgidlana, was placed on "special leave" after allegations of serious misconduct were levelled against him. At the time of writing, the NCOP is yet to schedule when it will consider a similar motion.

There are two mini-plenaries scheduled on Thursday. They serve as breakaway sessions of the National Assembly. According to the rules, any matter may be discussed or debated in a mini-plenary session. This mechanism provides an opportunity for the House to debate a particular topic without being required to take a decision at the end of the debate.

Mini-plenary 1: Subject for discussion (Mr M Nyhontso): Establishing shared values in a polarized, diverse society, that could cement a common nationhood and bring a sense of belonging to the most vulnerable.

Mini-plenary 2: Subject for discussion (Mr B S Yabo): Addressing inequality to advance the socio-economic rights of all and leave no one behind.

The week rounds off with an NCOP report-back session on the Women's Charter for Accelerated Development programme.

The Ad-Hoc Joint Committee on Flood Disaster Relief and Recovery will begin its work this week. It has scheduled a series of engagements with relevant stakeholders and a planned oversight visit to the areas affected by the floods.

On the sidelines, Parliament will meet with The Elders on Wednesday. This is a group – founded by Nelson Mandela - of independent global leaders working together for peace, justice and human rights.

We have just marked 3 years of the Sixth Parliament. In the remaining 2 years, the legislature will be working had to finalise all urgent business and fulfil its strategic objectives.

The virtual parliamentary corridor is again the site for many important hearings. Here is a rundown of the highlights:

Ad-Hoc Joint Committee on Flood Disaster Relief and Recovery, (National Assembly and National Council of Provinces), [Briefing by the Minister in the Presidency on the government relief & recovery plans; Briefing by the Minister of COGTA and Head of the National Disaster Management Centre on the amount of damage caused and relief & recovery plans], Virtual Meeting Platform, 09:00-15:00

Portfolio Committee on Mineral Resources and Energy, (National Assembly), [Consideration and adoption of the Motion of Desirability on the Gas Amendment Bill [B9 – 2021]; Discussions on the way forward relating to the Upstream Petroleum Resources Development Bill [B13 – 2021]], Virtual Meeting Platform, 08:00-09:30

Standing Committee on Finance, (National Assembly), [Briefing by the Parliamentary Legal Services on the review of the Financial Management of Parliament and Provincial Legislatures Act (as amended) and the work done by relevant structures on the matter including the Speaker’s Forum], Virtual Meeting Platform, 09:00-12:00

Portfolio Committee on Communications, (National Assembly), [Briefing by the Department on progress on implementation of the Broadcasting Digital Migration (BDM) Policy; Discussion on referral of on the Public Protector Report 114 of 2021/22; Adoption of outstanding minutes], Virtual Meeting Platform, 09:00-13:00

Standing Committee on Finance, (National Assembly), [Briefing by National Treasury on their quarterly report and briefing by National Treasury and SARS on the Protocol Amending the Agreement between the Government of the Republic of South Africa and the Government of the State of Kuwait for the avoidance of double taxation and the prevention of fiscal evasion with respect to taxes on income and the formal ratification of the Multilateral Convention to implement tax treaty related measures to prevent base erosion and profit shifting (BEPS MLI)], Virtual Meeting Platform, 09:00-12:00

Portfolio Committee on Public Service and Administration, (National Assembly), [Briefing by the Government Employees Pension Fund on turnaround time of payment of pension fund of the retired public servants and challenges encountered; An update by the Government Employee Medical Scheme in redressing the allegations of the racial profiling, transformation and implementation of the findings of the Advocate Ngcukaitobi report; Briefing by the Department of Public Service and Administration on the success and challenges regarding the implementation of Government Employees Housing Scheme and its savings; Consideration and adoption of the Minutes], Virtual Meeting Platform, 09:30-13:00

Portfolio Committee on Public Enterprises, (National Assembly), [Briefing by National Treasury and the Department of Trade and Industry on the policy impediments that prohibit state-owned companies from advancing their developmental mandate; Consideration and adoption of minutes], Virtual Meeting Platform, 10:00

Ad-Hoc Joint Committee on Flood Disaster Relief and Recovery, (National Assembly and National Council of Provinces), [Briefing by the National Treasury on the government relief & recovery plans; Briefing by the Auditor-General on the real-time disaster audit plan], Virtual Meeting Platform, 14:00-16:00

Portfolio Committee on Home Affairs, (National Assembly), [Clause by Clause Deliberations on the Electoral Amendment Bill 2022; Consideration of CVs and the report from the Office of the Chief Justice to fill a vacancy of an IEC Commissioner], Virtual Meeting Platform, 09:00-12:00

Committees provide a platform for the public to present views directly to MPs. Share your thoughts, on the ground experience and expert information to the relevant committees. Critically, what questions should MPs pose to the Executive as they conduct their oversight work? Write to a Parliamentary Committee.