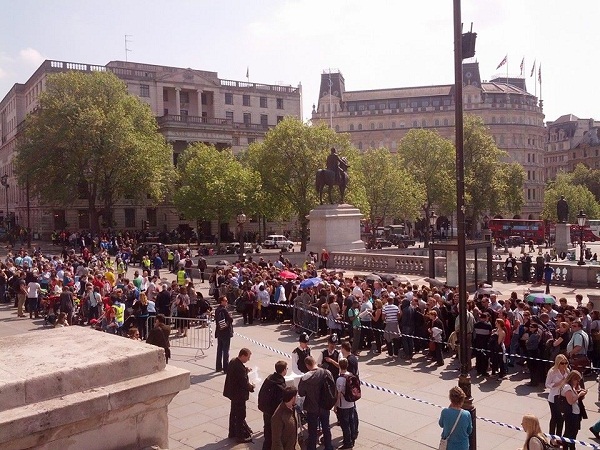 According to the Electoral Commission of South Africa (IEC), there are 26 701 South Africans eligible to vote abroad, with the highest number being registered in London (9 863) followed by 1 539 in Dubai and 1 243 in Canberra. The total number of votes abroad is estimated to account for half a parliamentary seat in the 400 member National Assembly.

People’s Assembly caught up with some expats living in different parts of the world to ask them about their experiences and why it was important for them to vote.

Having moved to the UK in 2003 and married to a local, Portia Gogela Roberts, 32, lives in Northamptonshire, England. Due to the long distance she had to travel and the tube strikes, she drove and spent last night at her mother’s house in Essex (a county north east of London). She woke up at 3am, left the house at 4am with her passport and green ID book and was in the queue before 5am. “I had some friends waiting in the queue so I did a sneaky and joined them but no one seemed to mind. The doors opened at 7am so I stood in the queue for about 2 hours”, said Gogela Roberts.

“It was quite a pleasant experience. We were the first 100 or so people so everyone was still fresh. When we got outside, the queue had tripled in length”, she added. Asked why it was important for her to vote, Gogela Roberts replied, ”To be honest with you, I’m just tired of the ANC. When I was growing up I had family in exile, my cousins were in Mozambique and we always put the ANC on a pedestal. As I got older I realised that there are problems in South Africa and my family were just voting for ANC because of loyalty. I think its time to give someone else the chance.”

She added that while she currently lives overseas she comes home every year to see her family and she’s planning on settling in South Africa at some stage. “ I need to know I’m coming back to somewhere that’s safe and secure and where my mixed race daughter has opportunities. I’m worried about the rights of coloured people,” says Gogela Roberts.

Dani Marais, 32, has been teaching English in Seoul, South Korea for six years. For her, voting was “quick and easy and totally seamless. The staff were helpful and there were no queues. There was one person in front of me in the booth and two behind me”.

When asked why it was important for her to participate in the elections she replied, “Its my democratic right and my chance to have a voice in the nation. We have so many important social issues happening in the country and we should all try be heard. Even though I don’t live at home, I do love my country”.

With approximately 350 people registered to vote, Marais said, “it was sad that only a tenth of South Africans living in South Korea voted. I don’t think it’s about apathy, I think it’s about having to travel and get time off. Its not so bad in a small country like South Korea, but it must have been very difficult in countries like Canada and Australia. I see some people even caught planes to vote”.

Gogela Roberts added that it was unfair that people had to travel so far to their embassies or high commission to cast their ballots. “We should be allowed to cast our vote electronically. The current system discourages South Africans from taking part as we have to take time off from work. It’s no small feat. We have to plan and it costs a lot of money”. Over and above reports of complaints about limited voting stations and long distances in the press, yesterday Times Live reported that some ex-pats were not informed that they had to fill in a VEC10 form - the form that notifies the IEC of your intention to vote. It also stipulates where the voter wants to cast his vote.

At least 40 of 130 South Africans registered to vote in Ghana did not appear on the voters' roll because they did not fill in the VEC10 forms. The blame has been attributed to a communication breakdown with the embassy and the IEC.

According to posts on the Vote Home facebook page, Carmen Faria was turned away from voting in London, as she wasn’t on the voter’s role. She said that despite having filled in her VEC10 form and taking her "Proof of Registration" along with her ID book and passport she was unable to vote.

In Dubai, Thess Le Roux Pretorius posted about long queues and the pride she felt that people had braved 40 degrees heat to vote. Meghan Cabral posted that voting in Dubai was “going at a snails pace because you apparently need to fill out a long form in front of the officials”.

Elsewhere in the world people had more positive experiences. Gabriella Bradshaw told People’s Assembly that after taking a while to find her embassy in Bangkok, Thailand, because Google maps had outdated information about it’s address; she was pleased it only took five minutes to vote. The cherry on the top was that after casting her ballot and getting her thumb inked she was invited to sit down to have a chat and share a koeksister with the ambassador.