In August 2019, the NHI Bill was introduced to Parliament and is currently under consideration by the National Assembly’s Portfolio Committee on Health. The Bill is currently going through the stipulated parliamentary processes, including a public participation period, which might inform some amendments to the Bill, before it is put before the National Assembly for a vote. The Portfolio Committee invited stakeholders and interested parties to submit written submissions on the Bill (deadline is 27 November). You can find the full details and a guide on how to write a submission by following the links. This is an opportunity for all South Africans to have their voices heard and give meaningful input to legislative processes.

If the National Assembly passes it, it will be referred to the National Council of Provinces (NCOP), for a similar process and concurrence. If the NCOP passes it, it will then be referred to the President who must give assent and sign it into law. We caught up with the Chairperson of the National Assembly’s Portfolio Committee on Health, Dr Sibongiseni Dhlomo, and this is what he had to say about the conceptualization of the NHI Bill and the attendant processes:

Click on the image below to watch the video, or read the full interview below. 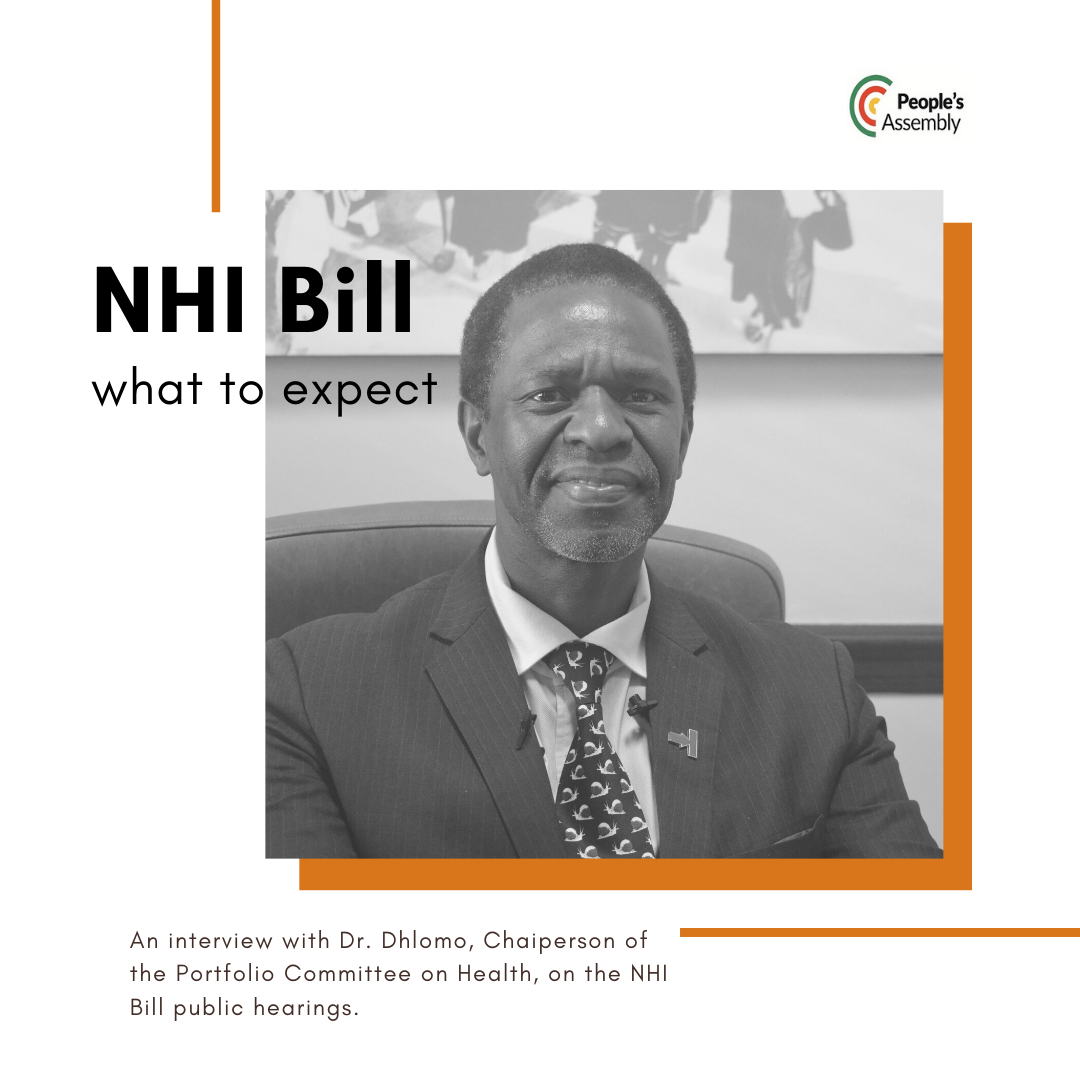 1.What is the Committee’s approach to these hearings and the importance of public hearings?

It’s important that as parliamentarians when we make laws, they are influenced by and have been commented on by our citizens that we represent. As parliamentarians we do not want to assume that our citizens like this, that and the other, especially when this is a new Bill that is going to translate into fundamental changes in health. So it is critical that we get the views of our people and let them comment and guide us on what they want us to put together, collectively.

2. What informed the venues chosen for the hearings?

Firstly, it’s not the first time that there are public hearings taking place throughout our country. So this Parliament has experience of that. With this Bill, we might be the first Committee of the Sixth Parliament doing it, but we borrow from those previous experiences. Secondly, we wrote to particular municipalities saying we want to come such as the Johannesburg Metro and that’s the start. You identify areas based on diversity, based on the geographic spread of our population in the country, in the provinces. Thereafter we have engaged on finding venues that are convenient for about four, five to eight hundred people. For now, we have actually chosen specific areas in the country, but we still have to get the municipalities to confirm. I’m glad that for the provinces that we’re already starting with, Mpumalanga and Northern Cape, we have got a lot of support from the municipalities and mayors, who guide us on where they normally have meetings of this size. But over and above that, those venues must still be accessible to our people because you would have a spread of about 70 to 80kms around that venue to go and collect people who want to come to those venues for public hearings.

3. Does the public have sufficient knowledge about the provisions in the bill? What can be done to make the public informed?

This NHI Bill is not a new bill. It was tabled in the Fifth Parliament and there was a start to engage the public on this. It’s been a talked-about bill. Secondly, we are grateful to the Department of Health for releasing about a million pamphlets in all 11 languages for people to read about it. As the Chairperson of the Portfolio Committee I commend the Department for doing that, and also encourage our people to read this exposition of what is NHI Bill, so that when we get to each public hearing we are able to engage with them on the Bill, because for us it is important to get their views and their comments. The Committee has already been briefed on the Bill and we have talked about it but we continue to talk about it in the public space. The Department of Health who is the main sponsor of this Bill has also been engaging our people. So the information is out there, the Department of Health has been placing newspaper adverts. They have been in the media. They have been on radio. So we think our people must be accessing that information. Then when they come to public hearings, they are better informed about this.

4. What are the main sticking points where there is major disagreement on the bill?

Look, it depends what is one's outlook in life. This Bill talks to the conscience of citizens. Universal health coverage is not something unique for South Africa. It’s something that is being talked about in the world. There are certain countries we’re learning from who have gone this way. So the sticking point is am I ready? Am I available to get into a principle that is called social solidarity. Am I ready and available if I’m young to carry the old? Am I available to if I’m healthy to carry the sick? Am I available if I’m wealthy to carry the poor? That talks about social solidarity. You will never have enough for the poor unless and until we are saying can these resources should be pulled together. The rich are always able to be looked after but part of what they have in the world can also benefit the poor. That is how we are going to uplift. That is how countries who have gone this route have done so. ---- So it is a social consciousness that must come into the play. That is where there are diverging viewpoints. But we are very excited and happy with the Health Marketing Inquiry report that has actually given us a story that says it is not only public health that has a challenge but even the private health. So we want to move away from the story that says fix your public hospitals and everything will be okay. That story can’t hold anymore. You don’t have to fix your public hospitals alone; we also need to fix governance. We also have to fix what is taking place within the private health care sector.

5. What question would you like the public to answer to assist the Committee? Sometimes, the hearings can become partisan and very loud. Do you have any thoughts on this or advice to the public?

I would like to say that the public must look at this as the first ever revolution of its kind in health, and go into it in a very cool and collected manner. The public must know that there are people who are going to oppose it. Largely it is those people who want to continue to benefit alone, and not benefit the collective. You’ll be pushing aside other South Africans to make yourself benefit. But the comfort for those who are rich, who are young and who are healthy is to say I’m ready to look after others because someday I’ll also be older and benefit. I'll contribute to this fund even though I may not benefit for the next 10 to 15 years because at least the poor, the sick and the old like my grandmother, my grandfather, and the uncle of my father, is benefitting. This is social solidarity, carrying the burden for other people as far as health is concerned. That is what we are trying to motivate our South Africans to do. These are the discussions that people must enter into and answer the question in their minds: Am I ready and available to carry those who are less fortunate than me to realise a better quality of health?

6. Is it anticipated that the Committee will be inundated with feedback, does the Committee have the in-house capacity to carry out this process or will additional resources be requested?

Look, as we are doing these public hearings, Parliament staff will help us with the logistics of writing down the questions and comments. People are going to be lined up at the meetings and have their say, we will note and record it. But in the event the meetings come to a close because of time constraints, for those who have not been heard, we’ll have tables set up and encourage people to write down their comments and say “I am Samukelisiwe Ndlovu and I do not like the NHI because I do not think I’ll benefit this and that” or “I like the NHI because it has a capacity to assist my mother”. So we’ll be taking those comments in the spaces where we are going to be. When we come back, we have to dissect and listen and read each and every comment. We do not right now anticipate that we might not have enough capacity.

Look, this is an exciting Bill. People have been looking forward to it. I don’t know to what extent society will respond to the public hearings. We’ll probably have to cross that bridge when we come to it in terms of are we able to monitor it. It talks to how much time we are going to allow for the Bill to carry on in Parliament before it becomes law. But for now we think we do have the capacity to start the process. As the process gets going, we will look into whether we’re managing.

7. By when do you expect to conclude all the hearings, June 2020? Just a rough idea?

We are starting public hearings this coming weekend on the 25 October in Mpumalanga and we’re doing four days. We’re really very thankful to the Members of Parliament who have agreed to use their weekends for this. We have to respect that our people are working so on weekdays, we will start at about 4.30pm and push right until 8pm. On the weekends on Saturday and Sunday we’ll start at 10am until 3pm. We request our people to sacrifice their weekends. It is once off for them. It will be quite a lot of weekends for us.

From 1 to 4 November we’re going to Northern Cape and covering four areas there. The following weekend we take a pause. Then we do back to back Limpopo, Kwa-Zulu Natal and Eastern Cape. We finish Eastern Cape on 3 December when Parliament rises. But as early as around 20 January we restart. We are going to do inland provinces back to back, Free State, North West and Gauteng. Which we hope to finish by end of January. In the first week of February we are back in Cape Town and we will cover the Western Cape again in four areas.

After the State of the Nation Address, we will sit and hold public hearings in Parliament and consider all those written comments that are coming in now. By the way you are still able to write to us with your comments until Friday 29 November 2019 which is the last day to make your written submissions. That process is going to take us through February and March, and by April we might still be continuing with the processes with the people. We are looking at May to submit our report and the NHI Bill to the Speaker so it can go to the House and be passed by May, June. By the latest July, August this Bill must have been processed by both Houses of Parliament, and be ready to go to the President to sign into law.