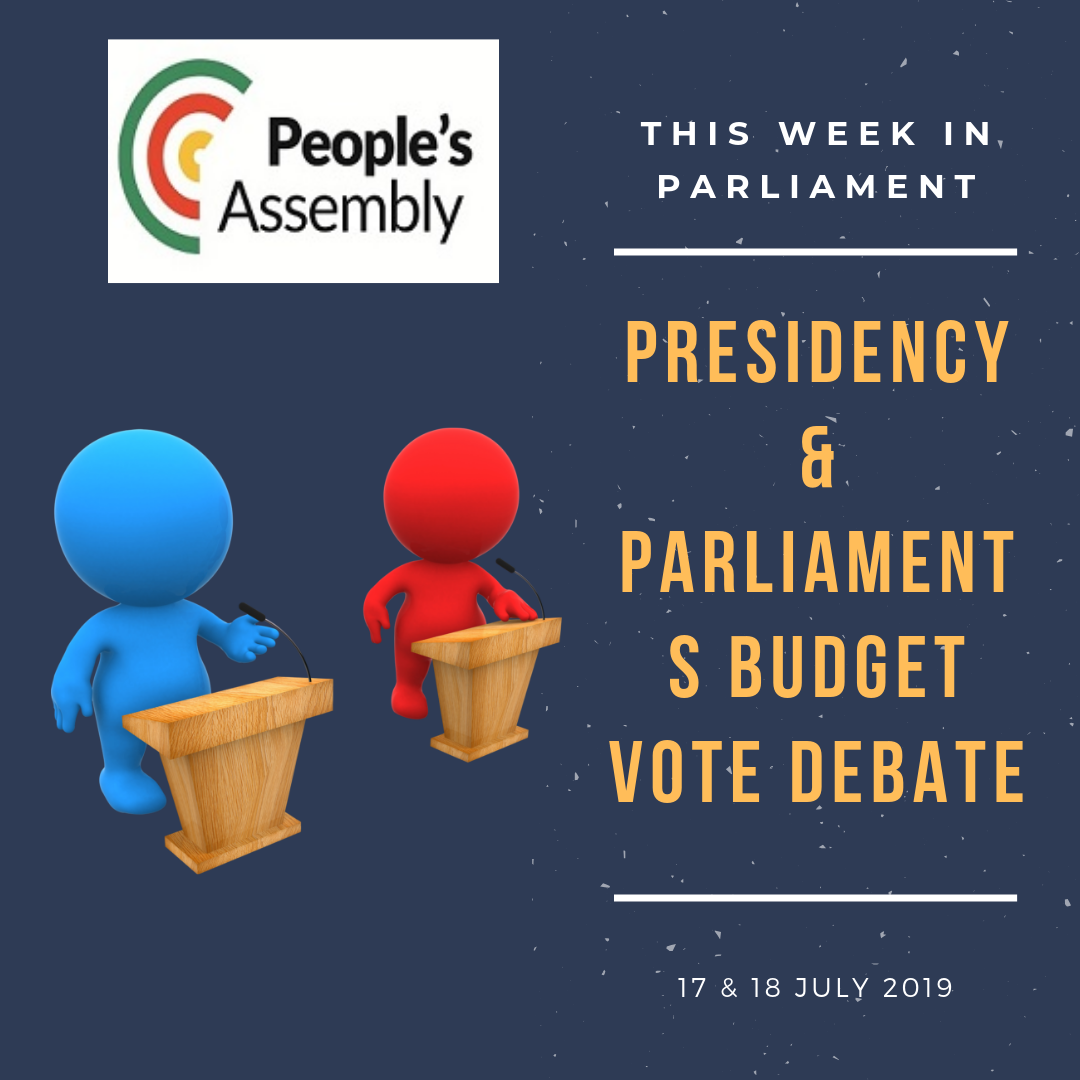 It’s another week where Parliament’s schedule is dominated by Budget Vote Debates.

These debates happen in the mini-plenary sittings of the National Assembly and are headlined by Ministers, their deputies, party leaders and senior MPs.

This period is usually frenetic as lawmakers jump from Committee work to attending budget vote debates on the same day. It is an exhausting time and will test the stamina of even the most hardworking MPs. Compared to last week, the schedule has eased a bit.

The main plenary event will be the debate on the Presidency's budget vote scheduled for Wednesday and Thursday. In their speeches, the President and Deputy President are likely to talk about the administration's priority areas, give an update on special projects and talk about government's efforts to stabilise SOEs and attract investment to the country. The President could also use the opportunity to give detail on the intentions outlined in the SONA – something the speech was criticised as lacking.

We are also likely to see a re-run of the SONA debate where parties spared no punches in criticising and highlighting the failures of government.

One of the peculiarities of our parliamentary system is that there is no parliamentary committee that oversees the Presidency. According to the IFP, South Africa is unique among parliamentary democracies throughout the world and the party has repeatedly asked that this anomaly be corrected. Previously, the IFP leader has stated that “while the budgets of every government department are pored over and questioned before we come here to express our agreement or disapproval, the Presidency's budget is presented as a fait accompli, and we rise in this House with scant capacity to debate what is being spent, where it is being spent and how it is being spent”.

This topic was raised again during the first NA rules meeting in the Sixth Parliament and it was agreed that this proposal would be considered.

The other big highlight will be the debate on Parliament's budget (the NA and NCOP will be having separate debates), on Tuesday. In their speeches, the presiding officers are expected to underscore the role of Parliament in our democracy, highlight the responsibility placed on MPs, talk about challenges facing the institution, indicate that Parliament is inadequately funded, lay out their priorities of the Sixth Parliament and give details on how they intend to build on the legacy of the Fifth Parliament.

The Joint Financial Management of Parliament Standing Committee met for the first time last week and was briefed on Parliament’s plans for 2019/20.

For their part, MPs will use the opportunity to express their ambitions for the institutions. In addition, they will raise the numerous challenges facing it: insufficient funding provided to political parties, inadequate facilities and support to MPs, poor replies to questions by the Executive, lack of decorum in House as well as the shortcomings in the Rules and their application.

Other matters that will be raised sharply will be about Parliament’s inability to discharge its oversight duty as well as interventions that are needed to strengthen accountability and public involvement.

Beyond this, the other standout budget votes include: Justice and Constitutional Development and Defence and Military Veterans.

Over in the NCOP chamber, delegates will meet over multiple days and be occupied with policy debates. legislative business, and assorted reports.

Away from plenary, there are several interesting meetings scheduled in the committee corridor. Here is a rundown of the highlights:

-It will be turn of NCOP committees to meet with government departments and entities to scrutinise their annual performance plans and budgets.

-A joint meeting of the Standing and Select Committees on Appropriations will meet on Tuesday to hold public hearings on the 2019 Appropriations Bill.

-The approved Ministerial Handbook will be in the spotlight when legislators get a briefing on it. The Handbook serves as a guideline for the benefits and privileges of the Ministers/MECs and their families in the execution of their duties during term of office and in some cases to the time thereafter. At the same meeting, the Department of Public Service and Administration will report back on the prospective state of the public service staff complement after reconfiguration: early retirements, severance packages and migrations. (Wednesday)