"I wish we could see our potential as a people, especially the marginalized and dispossessed of South Africa." 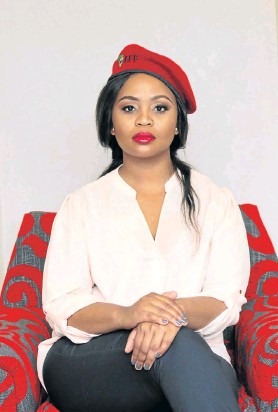 I first joined “politics” in 2014. It was not the first time participating. I have participated through the voting system. My first vote was cast in 2004. However in 2014, it was the first time I affiliated myself with politics by aligning myself with a political party through membership. That party was the Economic Freedom Fighters (EFF). I joined the EFF, after someone emailed me a copy of their founding manifesto in 2013. I found that it aligned exactly with the beliefs I hold, and the future I want to see for my country. I became a Member of Parliament in 2018, and then remained for the 6th parliament after the 2019 National Elections. Prior to that I was a PR Councillor, representing the EFF in Nelson Mandela Bay.

My job is to be a servant to the people. To be their voice. My job is to advocate for those who do not have powers to implement. I enjoy the exposure it provides me in seeing how the machinery works.

My party’s aspirations have always been clear. To see to it that land is expropriated without compensation through the amendment of section 25 of the constitution. To see that all strategic sectors of the economy are nationalized. To see to it that our people have jobs. To acquire economic freedom in this lifetime.

What obstacles prevent Parliament from doing its work and how would you fix it? Politics of patronage are the biggest obstacle. Corruption is an obstacle.

I have been assigned to Stutterheim. It’s in the most troubled Municipality in the Eastern Cape, the Amahlathi Municipality. I have been deeply involved even before the election phase.

I believe my party has been instrumental in making sure that the executive is held accountable. The EFF has been central in rooting out corruption and exposing gaps of service delivery. There is still a long way to go because our people are extremely poor and lack the very basic of services. Ministers need to take the issues of people on the ground seriously if they seek to make an improvement in this country

For now this works.

I believe government needs to do more educational programs. Most of our people are not aware of the rights they have. Some are not aware of the opportunities they are entitled to. Taking Parliament to the people needs to be on-going and not just a perfunctory system. It needs to reflect in results. Education of voters and concentrating on rural areas should also be a key focus. Unemployment is rife because our people migrate from their provinces under the belief that there are no opportunities in their home provinces, where as there are, they are just not informed.

I wish South Africans could understand the power they have. Activism starts at home. I wish we could see our potential as a people, especially the marginalized and dispossessed of South Africa. We have a long way to go, I believe that we will get our land back. I also believe that Economic Freedom will be achieved in our lifetime.