"We have got to identify and have honest discussions about those things that are holding us back. We have got to understand that the continued dominance of one political party is unhealthy for our future". 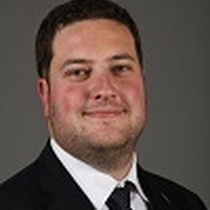 I joined the DA when I was in high school, in matric. I joined because through high school, I had some great teachers who got me to start thinking politically and start thinking about what was happening in South Africa, and in society and the world around me. And I became very socially aware and started reading widely. Once I had done quite a lot of reading, I decided that I wanted to join the DA. I felt that the DA best represented the things that I believed but couldn't necessarily describe clearly at that point.

Being an MP means that one is responsible for making laws and making legislation in South Africa. The way that is primarily done is through the Committees. I'm a member of the Finance Committee. In addition to that, a Member of Parliament also has a constituency. So I have to be responsible for what is happening in my constituency and managing a team there. And then of course there is the very small part of the job, which is actually what most people see, but it's the smallest part of the job, which is what happens in the Chamber itself. It is where debates and the passing of legislation happen.

My personal aspiration is to establish myself as an authority on public finance matters and associated politics. It is also important that the DA is known for making credible, realistic and positive contributions to the finance debate and alternative proposals for policy.

The biggest obstacle I think is the executive-mindedness of the governing party MPs, many of whom do not see their role as vigorously and strongly holding the government to account but rather see their role as supporting the government in whatever it wants to do - that is not the idea of a Parliament. The purpose of Parliament is to make laws and hold government accountable for the execution of those laws. That's the biggest obstacle. A second but very important obstacle is the lack of resources that Parliament has to do its job properly compared to other parliaments around the world. Our Parliament is extremely under-resourced in research capacity, media capacity, Committee capacity and that obviously does take its toll on the ability of Members of Parliament to do their oversight jobs properly.

My constituency is George, the town of George and the Southern Cape. That's quite a large constituency. The constituency work that I'm engaged in there is making sure that the municipality of George is doing a good job. I work with a team of councillors and activists there. Our team there helps people with any requests or complaints that they have about national government. So for example, one of the present complaints is around the support that they're receiving for public files and there's a lot of work to be done there.

I do not think that Parliament does a good job of holding the Executive to account. The biggest problem is that many MPs, particularly those from the governing benches, see their role as supporting government, not holding it to account. There has got to be a fundamental mind shift change about what accountability means in South Africa. Accountability cannot simply means occasional presentation by government departments before the Committees and answering few questions. It has to be more vigorous.

7. Are you happy with a proportional representation system or are you in favour electoral reform?

8. What can be done to get citizens more interested/ involved in Parliament? Is this an area where Parliament can improve and if so, what recommendations do you have?

I think Parliament can improve by advertising what is happening in Parliament better and giving people more of an opportunity or longer notice to partake in the public participation process. Very often the public participation process in Parliament is advertised only a few days before the hearings. This way, only those people who are well informed or who are watching a particular process will know about it because it's very poorly advertised. So I would say that Parliament can improve in this way. What are you passionate about? This applies both in political/ professional arena as well as personally? I'm very passionate about reading. I love reading widely and as much as I can. I'm passionate about my family and my church. I'm really passionate about my country. That is why I'm in this job and I believe I can make a positive difference and that's why I'm excited to continue to do this job for a long time.

South Africa can be a wonderful, prosperous and a united country but in order to do that, we have got to look to the future. We have got to identify and have honest discussions about those things that are holding us back. We have got to understand that the continued dominance of one political party is unhealthy for our future.