"Don't lose hope. South Africa is a Great country and things will improve for the better." 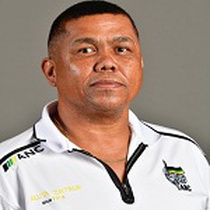 My political awareness dates back to the late '70s growing up in the then Transkei. As a boy of 14 years old having to get a passport to cross the Mzimkhulu river to attend school. However, my political activism started in the early '80s when we heeded the call from Lusaka by Oliver Tambo that we should boycott the tri-cameral Parliament system and make apartheid ungovernable. I became an activist and mobilized minorities to boycott the tricameral elections. I spearheaded the Happy Valley rent boycotts against the racist apartheid local councils and its hated race-based local authorities.

I am the Whip of SCOPA. Basically SCOPA is not like any other Portfolio Committee of parliament. I think the best way to describe SCOPA is a 'Watchdog' of government finances. My mission is to ensure that there is consequence management for the misuse of public funds

My aspirations for the Sixth Parliament are that as the governing party, we implement the ANC's NASREC Conference resolution; namely expropriation of land without compensation and radical economic transformation, which is to restructure the economy in favour of the majority.

I don't think that there is really an obstacle that prevents us from doing our work but I believe that MPs should spend less time in Parliament and more time in communities to ensure that these excellent policies of government are implemented, and to ensure that we give people good services. For example, we need to be there at the hospitals and home affairs to monitor and experience what our people go through on a daily basis instead of sitting in Parliament having useless debates, insulting each other, which has no improvement in people's lives.

Northdale Constituency Office, Pietermaritzburg. My office deals with all bread and butter issues.

Yes, we definitely hold the Executive to account without fear or favour. Furthermore, the Executive is on a performance contract with the President.

I think that South Africans are generally very interested in what is going on in Parliament. All kinds of social media is abuzz about politics and what we are doing in Parliament. My passion is SPORTS

Don't lose hope. South Africa is a great country and things will improve for the better.