Get To Know Wayne Thring 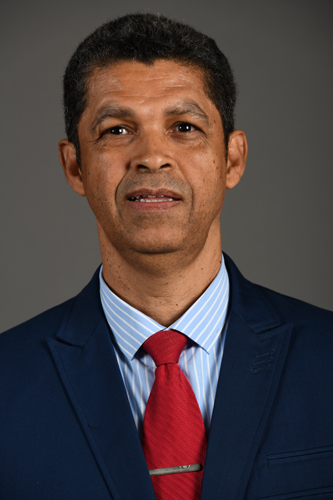 During the early 1980’s I served as a youth leader for the UDF in Newlands East, Durban. I came to know Christ as my personal Saviour in 1984 and ceased all political activities, giving my available time to the Church. In 1995, while studying in our Church building, I read the book, In His Steps, by Sheldon. After reading the book I felt led to get involved in the new political dispensation and prayed that God would send someone to the Church to guide me. The next day Pastor Simon Haines invited me to an ACDP meeting, and the rest, as they say, is history. I started my branches and soon became the KZN Provincial Chairman, then Provincial Leader, Federal Council of Provinces Chairman, and currently, Deputy President of the ACDP, before being elected to serve as an MP.

It is the goal we all strive for the ACDP, which is to see a Godly governmental system in South Africa, where the Biblical principles of justice, righteousness, honesty, integrity, accountability and transparency, are not just a dream or words written in policy documents, but a lived reality for all South Africans, irrespective of one’s race, religion, creed or tribe.

I serve on two Portfolio Committees, namely, Trade, Industry and Competition and Public Works and Infrastructure. I am an alternate on the Agriculture, Land Reform and Rural Development PC. I also served on the Section 25 Ad Hoc Committee, which sought to amend Section 25 of the Constitution, to allow for expropriation of land without compensation. My job as an MP, is to represent my party, the ACDP, our constituency base and South Africans, at large, to the best of my ability, not only in the Committee meetings, but also in our Parliamentary sittings. It involves preparing for the meeting’s agenda items, studying the necessary documents, researching and preparing appropriate questions, responses, speeches and holding the respective Ministers to account. There are also oversight visits to different provinces, where on-sight visits occur to inspect the functioning of the Department’s entities, in terms of their mandates and budget allocations. My job as an MP and as part of the broader collective, is to also hold Cabinet to account.

There are many challenges, the first of which is the efficient utilization of limited time. Secondly, within the ACDP, we have limited resources, yet despite this, much of the work input required is carried valiantly by our MPs. Perhaps the most critical challenge is the balancing of spiritual, family and work time, but somehow, grace is given to us to maintain this balance.

I have two constituency offices, one in my KZN home province and the other in Mpumalanga. This obviously adds to my workload, but as a growing party, the ACDP has to spread its 4 MPs and 3 MPL’s across our 9 provinces. Constituency work involves the administrative as well as the practical aspects. Administratively, one has to oversee staff, office rentals, communication and such like. On the practical side, it involves dealing with the constituency queries, demands and community interventions required. Constituency work also involves addressing our communities service delivery challenges in Parliament, meeting with staff and different stakeholders on a regular basis. My constituency offices often serve as an interface between National and Local government.

The key to driving public participation is education. Many South Africans are apathetic and many more are unaware of the privilege afforded to them through public participation, as contained in our constitution. Sadly, not only are they unaware of the privilege, but also the responsibility they have, to help draft legislation and policy and to use their vote to effect meaningful change in South Africa. To counter this, various education programs can be included in our curriculums, at primary, secondary and tertiary education levels. ABET programs should also be targeted, as well as community forums and NPO’s. Public participation education programs should also be promoted through business forums such as Nedlac and worker unions.

I am passionate about my God and my relationship with Him. From this, I derive my passion to assist the vulnerable, the marginalized, the down-trodden and those considered to be outcasts amoung us. I am passionate about seeing South Africa and the continent of Africa, reaching its full potential as it breaks free from its oppressive past. I am passionate about learning, living and using my gifts and talents to assist others. This keeps me energized and focused in both my professional and private life.

There are many social justice issues that I have been involved in, from those impacting women and children, human trafficking, drug and alcohol abuse, to the effects of poor service delivery in our communities. The most recent social justice issue I have been involved in pertains to our constitutional right to bodily and psychological integrity, which includes the right not to be subjected to medical or scientific experiments without informed consent, (Sect.12(2)(c) of the SA constitution), including other prescripts found in our Bill of Rights.

No, Parliament is not doing a good job in holding the Executive to account. This is supported by the judgement of former Chief Justice, Mogoeng, who chastised Parliament for not holding Cabinet to account on the Nkandla saga and this view is further corroborated by the Zondo report on State Capture. Furthermore, I believe that there was an abuse of the State of Disaster for almost two years, where numerous legislation was passed, by-passing the oversight of MP’s in Parliament. No Minister should be allowed to extend a State of Disaster, beyond a six month period, without obtaining the approval the Parliament. Performance agreements with clear KPI’s and KPA’s, for all Cabinet Ministers should be made public and should they fail in these areas, consequence management must apply.

The ACDP desires only the best for all South Africans. As we fast progress towards the end of this sixth Parliament, our ACDP representatives will continue to put forward ideas and plans to address the pandemic of fraud, corruption, irregular and wasteful expenditure in South Africa. The ACDP will continue fighting against the giants of: unemployment, slow economic growth, substandard education, poor health services, crime and threats to property rights and rural development. As we continue to grow our ACDP structures, it is so that South Africans can enjoy genuine change and renewal in our country, built on the pillars of integrity, justice, competence, honor and respect.