Gender representation in Parliament: Beyond the numbers 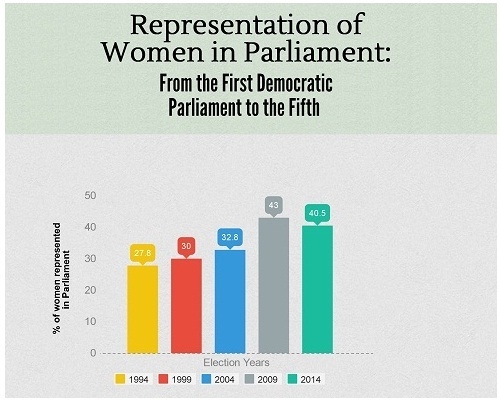 As People’s Assembly recently published an infographic on the gender breakdown of seats in both houses of Parliament, we thought we’d go a step further and get some analysis on whether a higher number of women MPs translates into more gender equality in legislation. We caught up with honorary research associate at Wiser and expert on violence against women, Lisa Vetten.

Considering the number of seats filled by women, the National Assembly saw a decrease from 43% in 2009 to just below 40.5% in 2014. Vetten said, “It is interesting if you look at the statistics by party; it certainly looks like the drop might be as a result of the overall decrease of the ANC’s support nationally as they consistently have the highest representation of women MPs. The DA does not have any form of quota system.” While 47% of the ANC's seats are filled by women, the DA has 28% and the EFF 32%. As the ANC recently garnered criticism for having seven male premiers and only one female premier and Premier of the Western Cape, Helen Zille, was called out for having a predominantly male provincial cabinet, Vetten asked, “Are we effecting change at the top and not the bottom?” She added that we also need to cast a spotlight on the local government level.

Vetten went on to explain she is “quite ambivalent about the usefulness of gender quotas. On the one hand the argument is that if half your population is made up of women, then your public institutions should reflect that. But does putting women in Parliament change the lives of their constituents; of women outside?” she asked.

She argued that it is important to understand the difference between descriptive and substantive representation. According to Vetten, South Africa focuses on descriptive representation and numbers, rather than focusing on what women MPs do once they are in power and whether their decisions advocate on behalf of women’s rights.

Furthermore, it appears that there is not necessarily a correlation between high numbers of women MPs and more gender equality in legislation. “If you look at the first democratic Parliament where not many women had seats, they passed probably the most progressive legislation to date,” Vetten said.

MPs need some “some sort of gender consciousness,” says Vetten. However, rather than representing their constituents generally and women in particular, MPs usually represent their parties. She explained it might therefore be useful to ascertain a party’s stance on particular gender issues.

Vetten also cautioned that female MPs who push gender issues are often pigeonholed into only being interested in feminist concerns so they will not always speak out about their concerns.

Asked about her opinion on the new Women’s Ministry, she replied, “Its potentially good that women now have a Minister of Women in the Presidency as she [Susan Shabangu] may have the clout that is required… but we don’t know what the Ministry’s mandate is; we need to see it on paper,” said Vetten.

She added that there might be some similarities with the Office for the Status of Women that predated the Department of Women, Children and Disability and also fell under the Office of the Presidency. It was supposed to be a “co-coordinating structure for the gender machinery” - including Parliament, the Commission on Gender Equality and civil society - and Vetten would like to see a return to that function as the now defunct department was seen as having “a top down state-driven approach”. Vetten hopes the new Ministry will “open up the space again for civil society participation; a contested space where women can come and say what they think equality looks like.”

What about legislation and the year ahead in Parliament?

“As we know, WEGE [the Women’s Empowerment & Gender Equality] Bill wasn’t passed last year largely as a result of civil society pressure. The stuff that was left on the backburner a long time ago such as the legislation around Muslim marriages (15 years), prostitution (20 years) and domestic partnerships need to see movement. It is more important than WEGE,” Vetten said.

“Before we get on to fixing what is wrong with WEGE we need to find out if there are gaps in existing legislation or if the problems are implementation. This requires analysis.” Vetten added.

She was also concerned about capacity of “the supersized justice and correctional services department” as the Justice and Constitutional Development Portfolio Committee already had a lot to deal with regarding the non-compliance with the Sexual Offences and the Domestic Violence Acts.

Vetten suggested that this year Parliament hold public hearings about the accessibility of termination of pregnancy procedures, as she was concerned that not enough women are being afforded the option, which is a threat to their democratic rights.