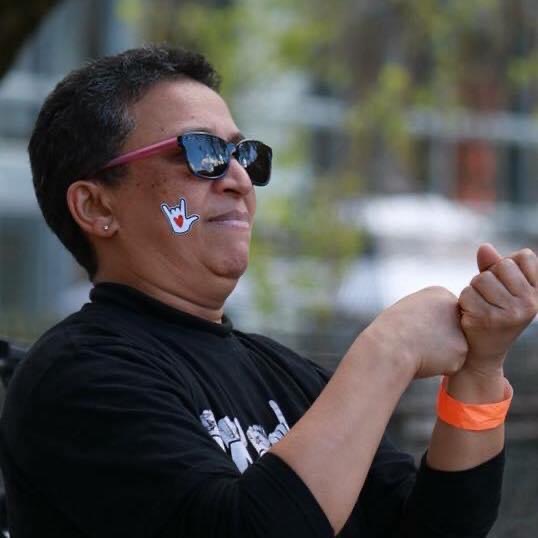 The United Nations recognises the 23rd of September as the International Day of Sign Languages. This day provides a unique opportunity to support and protect the linguistic identity and cultural diversity of all deaf people.

To help us understand the importance of this day, we spoke to Dr Wilma Newhoudt-Druchen. She is the only deaf Member of Parliament. She is a member of the African National Congress. In this blog, she helps us understand the challenges that deaf people face in South Africa, and during the Corona Virus.

The 23rd of September is International Day of sign language. What does this day mean for you? What is your message to South Africans, particularly deaf people on this day?

I am very proud that the United Nations (UN) approved for this to be recognised as International Day of Sign Language. Every country should approve their own country’s sign language and it is my hope that eventually all countries will have sign language as an official language in every country.

In your tenure as a Chairperson of the Joint Monitoring Committee for Women, Children and Disabled Persons, and member of the Portfolio Committee on Communications, you lobbied the SABC for more access to sign language interpreters on television because deaf people cannot listen to radio. Looking back, do you think the SABC has done enough to accommodate deaf people?

The South African Broadcasting Commission (SABC) has done a lot, but there is still more to be done. Television (TV) should be 100% accessible to deaf viewers as we pay the full cost of the TV licence. There should be no exception, just because we are deaf. We do not receive full access to TV, as only some programs are subtitled or captioned and only some programs have SA Sign Language interpreters (SASLI) in the interpreter’s box.

I am a member of the South African Parliament, and I would like to get the comments from different parties after the President’s address, for instance, but I cannot because there are no sign language interpreters for that. Prior to the opening of Parliament there were many commentators talking about the opening, and what they thought the President would say at the opening. Because I am deaf, I have to think about what they this is happening around Parliament and the nation. I have to think that, because I do not have access to what is being said as there are no sign language interpreters or subtitles. That is also the time when many deaf people panic. There is always a bit of panic before the President’s address in Parliament, because we have to think about whether the address will be interpreted into South African Sign Language (SASLI). Then we all sigh with relieve that the moment the President starts talking, the SASLI comes on. Why is it that? Why can’t we have access in SASL or subtitles to everything. Are we not full citizens of the country? Do we not deserve full accessibility especially to TV?

Recently Parliament’s Constitutional Review Committee has recommended that sign language become the country’s 12th official language. How do you feel about this?

I was there with representatives of DEAFSA when the constitutional review committee made this recommendation to the National Assembly (NA) and to the National Council of Provinces (NCOP). It is fantastic, but then what? Both houses adopted the recommendation. The President mentioned it in the State of Nation Address (SONA) 2020 address, but then what?

We are still waiting for the next move, for it to be in the constitution of South Africa as an official language. That is the next move and it cannot come sooner. Deaf people have been waiting for this since the dawn of democracy.

Do you feel that the recognition of sign language as the 12th official language will reduce some of the barriers that deaf people face when going about their day-to-day lives?

Yes, hopefully it will happen that barriers deaf people face will be reduced. But, as I have allude to earlier that can only happen if people are aware and educated about the needs and the rights of deaf people and all other people with disabilities.

What kinds of challenges do you face as a deaf MP?

Many challenges! I wish I have the benefit of listening to political commentators and listening to different political views on radio and on TV. Sometimes people think that the sign language interpreters live with me.

I read three or more Sunday newspapers just to catch up with the different views but the hours in the day are just not enough.

Even the other day on my Whatsapp constituency group and in my neighbourhood watch group, people send voice messages. How am I supposed o understand a voice message. I hate them but I have learned to be patient. I have to decide if it is important enough to send to my own work SASLIs for them to transcribe or for them to sign on the Marco polo app for me.

This time of Covid19 and lockdown has challenges too, not just for me but for most deaf people all over the world. To wear mask or not to wear mask? Is the face shied safe enough? Not all deaf people can lip read. Please do not assume so, but for those of us who can lip read, it is very frustrating to not lip read. Even for a deaf signer, the mask is difficult because it covers half the face - the important facial clues that go with SASL, are difficult to read. On Parliament TV when the SASLI is not in the interpreter block, the deaf viewers cannot access Parliament. Committee meetings aired on TV do not have SASLIs so how must deaf people and myself be able to watch Parliament channel. These are just to name a few of the challenges.

Do political parties take deaf issues seriously? Why are there so few deaf public representatives and what can be done to rectify this?

Even if there is a deaf political party, funding will become an issue, because that party must pay to register with IEC, must pay to contest an election at all levels, local, provincial and national. It cost money to run an election campaign and deaf people may not have all the access to that kind of funding. As far as I can remember it is only the African National Congress (ANC) that has been committed to having a deaf MP in its seats.

To read more about Dr Newhoudt-Druchen, check out her profile here.

Dr Newhoudt-Druchen highlighted compelling issues about efforts to legally recognise SASL as an official language in South Africa. Check out this webinar here.

People's Assembly would like to thank Dr Wilma Newhoudt-Druchen on collaborating with us on this blog, we also acknowledge the selfess work that she does to raise awareness for deaf people and making basic services accessible to deaf people.