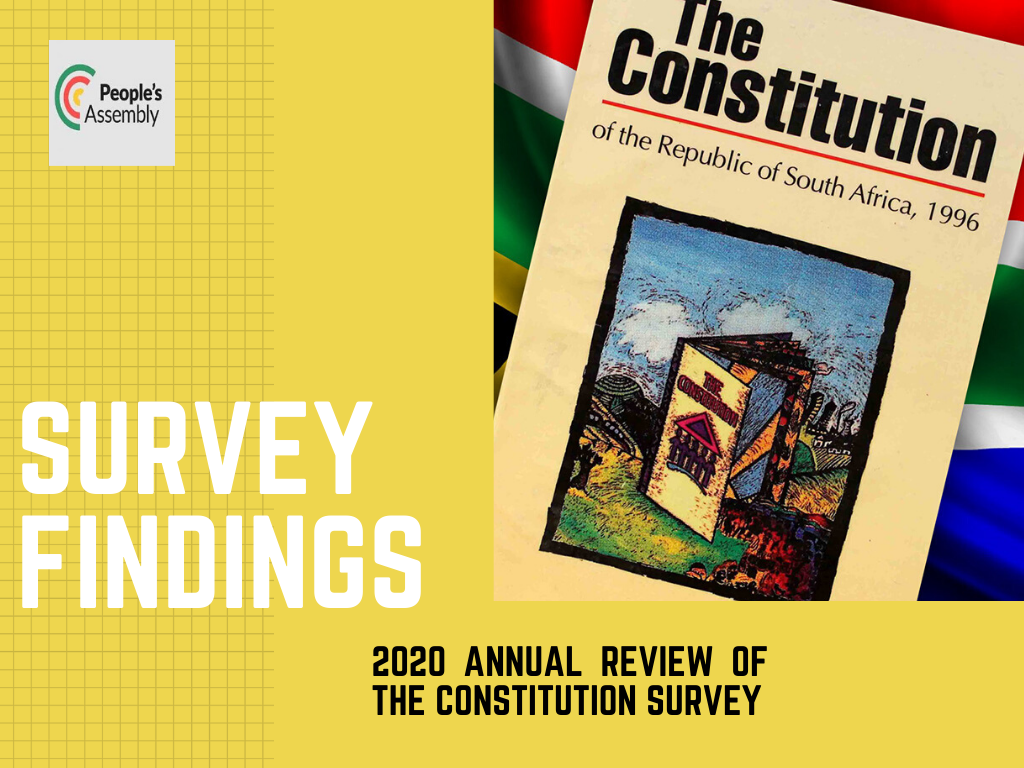 Every year (excluding an election year), the Joint Constitutional Review Committee is mandated by both Houses of Parliament to seek written public submissions on the annual review of the Constitution.

To go along with this year’s invitation for comments, we decided to test the public’s view on this. The findings of the survey are from 113 respondents that found out about our survey through Twitter and Facebook social media platforms.

Below is a summary of their responses on which section of the constitution they would like to amend and why.

One respondent felt that: “The right of life should not be available to those convicted of murder, rape, child rape. In other words, the death penalty must be available as a punishment for those categories of conviction.”

Another respondent said: “Section 11 right is being used in a bad way. Murderers are allowed by law to go and kill an innocent person for his own property, but when that killer gets killed by the victim he or she gets arrested. Why must the victim be arrested if he or she was defending himself? The judiciary always allows killers to get away with murder due to this provision. Criminals have too much rights”

Equality as it pertains to Black Economic Empowerment / Affirmative Action Some respondents felt that BEE policies are intended to uplift some people and not all. They felt that the implementation of BEE policies is racist in nature.

For instance one respondent said the following: “The time to scrap BEE has come, it is time to stop racial profiling. I believe it is disgusting that one would get a job based on skin colour. I found out the hard way that in some countries it is illegal to state your race on your resume. We all as South Africans should be treated equally no matter the colour of your skin. Jobs should go to those that are best suited / qualified. In actual fact I believe BEE is against constitutional rights.”

Another respondent said: “BEE must disappear in SA because I’m white but I can't get SASA. SASA is denied to many white [people] and their children , housing or own a small piece of land , medical aid , food in emergency like the corno19 virus , at this time June 2020.”

Another respondent said: “Affirmative action should be removed as a criteria for employment, merit should be the only criteria and job opportunities should be open to people of all races in South Africa”

Some respondents felt that the Bill of Rights should be amended. They felt that the Covid-19 pandemic has exposed how the Constitution does not entirely protect their rights during times of crisis.

One respondent said: “Chapter 2 Bill of rights: no realistic provision is made for people to ensure that their rights are not violated, or if they have been violated, to take realistic action to ensure that it is not repeated. A right to bear arms would give realisation to ensuring certain of your rights are not violated. There should also be a better way to legally ensure rights as going to the constitution court is beyond most individual's means.”

“The Disaster Management Act should make provision that NO human rights may be ignored during a time where this act is brought into effect. That nobody may violate the civil liberties protected under the constitution. That society has a right to protest and/or petition the highest office in order to have their grievances heard. Any new regulations should be given a full, transparent public review before being instituted.”

A few respondents acknowledged that there are gaps in the right to education and felt that there should be changes in how education is made accessible to all people.

One respondent mentioned that sign language must be taught and be considered as the 12th official language in South Africa.

Some respondents suggested that the regulations that allocated land must be amended so that land can be returned to its rightful owners.

One respondent felt that the issue of land must be discussed jointly with indigenous people because “indigenous people must be part of discussions and let them know what is happening on their land and country.”